OUR in-depth investigation into Nigel Goldman and his dodgy group of friends should make genuine, law-abiding folk more aware of some of the scum whom they unknowingly rub shoulders with… and possibly meet…‘out and about’ on the coast.

As the investigation into the complex web of criminals has unearthed increasingly dark lifestyle secrets, threats have been made against this newspaper, its journalists and even its families.

Exposing law breakers and their cronies is not for the weak-hearted.

It is not for nothing that in a poll of professions recently, journalism came 199th out of 200, due to its low pay, stresses and dangers.

But, whatever the risks, the Olive Press will continue to campaign against those who cheat, flout the law, and sadly all too often leave innocent victims with broken lives.

Because after all, nobody else is going to.

Despite the threats, exposing such people remains a top priority, and one that will not be abandoned. 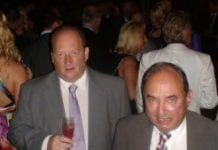