A SPANISH art expert claims to have picked up a priceless sculpture for next to nothing at a local market.

David Espana – owner of Studio 54 in Casares – discovered the piece by American artist Alexander Calder buried in clutter at a house clearance market in Manilva.

Despite going to the market every week since moving to Casares in 1997, he has never found anything so remarkable.

“The piece is worth a small fortune, of course, but the most important thing is that I have rediscovered a real artistic treasure,” he said.

“I’ll definitely be keeping it, it’s too important to me to sell it on. But of course not in my home or studio.”

A life-long fan of Calder’s work, 54-year-old Espana knows what to look for, pointing out the interlinking ‘AC’ carved into the base.

Calder – who was even honoured with a ‘Google Doodle’ for his 113th birthday – is best known for his kinetic sculptures.

“This piece is typical of Calder’s work. It’s part of a series he did in the 60s,” said Espana, adding that the series features a huge range of different sized sculptures.

“While this is one of the smaller ones, the largest was exhibited in the Park Avenue Guggenheim in New York.”

Calder – who spent many years in Barcelona – was greatly influenced by his close friend, the Catalan artist Joan Miro.

“That’s why this piece of work is so special to me, because of its Spanish ties,” adds Espana, who has lived in New York most of his life.

“I am very attached to my Spanish roots because I lived out of the country for so many years.”

Tucked away in a cave in Casares, Espana’s gallery previously hit Olive Press headlines in 2013 after a visit from Hollywood superstars Angelina Jolie and Brad Pitt. 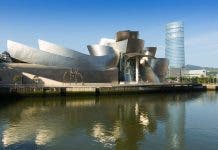