PRINCESS Cristina Street in Moraleja del Vino is no more after the town chose to rename the thoroughfare to dissociate from the corrupt Infanta.

Towns across the country are renaming their streets that pay tribute to the Princess in light of the massive scandal surrounding her and her husband Inaki Urdangarin’s alleged embezzlement charges.

For many towns, the decisions were made without much fanfare, as in Palma de Mallorca where a main boulevard named after the couple in 1998 was switched back to its original name.

However, in Extremadura, United Left (Izquierda Unida) politician Victor Casco made a very public announcement about the Princess Cristina Hospital, saying that names of public buildings should honour ‘citizens who have led exemplary lives’.

Other towns with Cristina streets are waiting for an official sentencing from the judge before permanently removing their street signs. 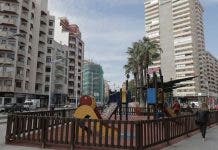