LIKE a waterfall cascading down the steep sides of Mount Calamorro, Benalmadena tumbles from its origins as a white mountain pueblo down to the sea.

Sandwiched between Torremolinos and Fuengirola, the three distinct neighbourhoods that make up Benalmadena – the pueblo, Arroyo de la Miel and the costa – can keep even the most picky holidaymaker coming back for more.

A veritable town of entertainment there is definitely more within its boundaries for the tourist than practically any other resort in Spain.

From beaches to mountain walks, theme parks to history, there’s no doubt that Benalmadena has a multiple personality, and it’s certainly not a disorder.

Any trip to the resort must begin 280 metres above sea level with the pueblo, a charming Andalucian village with narrow streets, whitewashed houses, geranium-filled window boxes, pretty squares and – unlike its bigger, brasher lookalike neighbour, Mijas – not a tour bus or donkey in sight.

From here the municipality winds steeply down to Arroyo de la Miel, the commercial and residential heart, finishing its journey in Benalmadena Costa, the coastal strip where most of the tourists stay.

My weekend in the town started with a ramble around the pueblo, which centres on tranquil Plaza de Espana.

This ‘social hub’ is often so quiet you can hear the proverbial pin drop but first impressions can be deceptive.

Behind the shabby-chic front doors and white walls, into which the more enterprising shopkeepers have embedded coloured stones and shells, artisan craft shops are hives of tourist activity.

Strolling through the floral twists and turns of the nearby Jardines del Muro that teeter on the very edge of the hilltop town, you feel like the only person left on earth; although the perfectly-manicured flowerbeds hint at the presence of green fingered ‘others’.

Leaning out over the edge of these spectacular gardens to take in the panoramic view of the coast, the only sounds are the far-off drone of cars on the A-7 and the occasional splash or shout from the villa swimming pools below.

It is easy to stray off-path in the pueblo. From my crow’s nest viewpoint in the gardens, the hint of a fairy turret through the trees sparked my curiosity.

The Castillo de Colomares is one of the highlights of Benalmadena. Its spun-sugar Walt Disney turrets, trills and towers are so delicately-carved they seem to be an architectural impossibility.

But one of the most surprising facts about the castle is that it was only completed 22 years ago, by Doctor Esteban Martin.

A talented amateur architect, the doctor built the castle as a monument to the great New World explorers, a period of history which fascinated him.

This explains why a replica of one of Christopher Columbus’ ships, the bow of the Pinta, juts surreally from the walls.

An incredible mix of architectural influences ranging from Romantic to Gothic to Mudejar, the castle took seven years and many millions of pesetas to build.

Inaugurated in 1992 by the last descendant of Columbus, a mass was held in the castle’s chapel – listed in the Guinness Book of Records as the smallest in the world – by a priest from Palos de la Frontera in Cadiz province, the port from which Columbus set sail and where you can also see replicas of his ships today.

But my hunger pangs told me I had been captivated for way too long by this bizarre monument.

I hiked back to the pueblo on foot, refusing to give in to the temptation of the ‘urban lift’ that has been installed for hefting you to the upper part of the town.

The pueblo is full of tapas bars and decent restaurants, including a superb German-run steak joint Longhorn and the delicious Italian La Pala d’oro.

I was also lured in to try the family-run Bar Meson Pepe – tempted in by their ‘four tapas and a drink for €5’ deal.

Across from the Iglesia de Sto Domingo de Guzman, taking pride of place in a pigeon-filled square next to the Jardines del Muro, it’s a spot-on setting for sampling homemade croquetas and albondigas.

Replete after my feast, I set off to admire yet another of the town’s surprises: a giant Buddhist monument that seems very much at odds with the rest of the landscape.

The Benalmadena Stupa (or shrine) appears out of nowhere on the drive up to the pueblo and, at 33 metres tall, it has earned the title of the largest stupa in the Western world.

Representing peace, prosperity and harmony, it was the final project of Buddhist master Lopon Tsechu Rinpoche and was inaugurated in October 2003.

He built many in both the East and West but the Benalmadena Stupa is regarded as the crown jewel of his career.

With it, Benalmadena is linked to all countries where Buddhist philosophy has flourished including India, Asia and China, Indonesia and Cambodia, all of which are home to these highly-symbolic monuments.

It could have just been a trick of the mind – or perhaps the atmospheric music and incense – but the gardens surrounding the stupa do feel incredibly calm. And despite being slightly sceptical, I was even persuaded to test the theory that if you walk clockwise around the stupa, your wish will come true. No result on that so far.

To continue the peaceful ‘at one with nature’ feeling, head over the road to the Mariposario butterfly park, where the humidity, exotic flora and copious species of bright-winged butterflies might convince you – if the resident wallaby doesn’t – that you’re down under in Australia!

The park is a butterfly’s flutter from Arroyo de la Miel and Benalmadena Costa, where you’ll find many other reasons why day-trippers and tourists flock to this three-in-one town.

Arroyo is home to Tivoli World amusement park and nearby make sure to visit the superb Sealife Aquarium, one of the best in Spain, with its amazing underwater tunnel, while Torrequebrada’s famous casino is also nearby.

And it’s not just families who are thoroughly catered for. Downtown Benalmadena boogies to the beat of a hip beach club vibe by day and a thriving after-dark clubbing scene.

But there are few better ways to admire all that Benalmadena has to offer – the pueblo, the costa and everything in between – than the Teleferico cable car which ferries hundreds of people per day from its base in Arroyo de la Miel to the peak of Mount Calamorro.

En route, a voice recording points out Malaga and the Sierra Nevada mountain range to the east, across to Gibraltar in the west and, on a clear day, the coast of Morocco.

Below – if you can fend off the vertigo – look out for the foxes and wild boar that have made their homes in the scrubland; or look up to spot golden eagles as they soar high above, scouring the rocks below for for dinner. Snub-nosed vipers and chameleons are their favourite fare.

If you time your ascent at around 4pm, you can enjoy the shows at the summit. At 4.30pm you can see Andalucian horses galloping and prancing to music against a stunning backdrop of coastal views.

And if you didn’t spot wild eagles from the cable car, at 5.30pm there is a falconry display starring griffon vultures, eagle owls and a particularly beady-eyed hawk.

For my grand finale, I made the short hike to the very peak, to admire views I will never tire of. From here you can pick out the boundaries that divide this quirky tripolar town into each of its three personas.

One place, three visitor experiences, and you have to try them all. 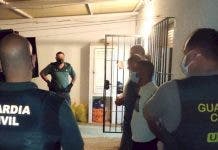