THIS Thursday is Guinness World Records Day and gearing up for the occasion Malaga attempted to beat the for the world’s largest stamp mosaic.

Over the weekend stamp collectors rallied to donate stamps in an attempt to create a mosaic that would cover about 200m² at the Martin Carpena sports stadium.

The national post office, Correos, organised the event and hoped to create a huge ‘ñ’ made out of about 200,000 stamps as a symbol of Spain.

Correos are now patiently waiting for the official verdict by Guinness World Record representatives but the situation seems promising.

Currently the record is held by the South African Post Office for a 162 m² mosaic made up of 120,000 stamps depicting the Johannesburg skyline.

The Spanish are no strangers to Guinness Records, having claimed quite a few over the years, and quite a few this year.

This summer 352 kitesurfers in Tarifa broke the record for the largest kitesurfing parade to cross one nautical mile.

While gamer Rodrigo Martin Santos, 27, was awarded a record for the largest collection of Tomb Raider memorabilia thanks to his 2,383 items.

Valencia on the other hand has a long-standing tradition for making giant paellas and restaurateur Juan Galbis officially made the world’s biggest paella in 1992, feeding 100,000 people.

And keeping up with the food records, young chef Senén González supervised the making of the world’s largest tortilla in Vitoria-Gasteiz, in Northern Spain, which came in at 5m and weighing 1,500kg. 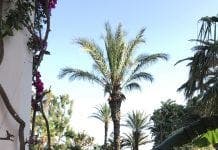