GREENPEACE’S ship, the Arctic Sunrise, has been seized by the Spanish Navy after staging a peaceful water protest off of Lanzarote.

The ship had been situated on the waters in protest of the Spanish government’s search for oil in the waters surrounding the Canary Islands.

The seizure comes just three days after a Greenpeace dinghy was rammed by the Spanish Navy, injuring four activists.

Mario Rodriguez, director of Greenpeace Spain, said: “The detention of the Arctic Sunrise violates the rights of all people who strive to defend the environment.

“It’s telling that the Spanish Government would so quickly support the interests of an oil company, Repsol, against a peaceful environmental organisation which stands alongside millions of people who oppose reckless oil exploration.”

On November 15, a 23-year-old Italian woman suffered a broken leg after being knocked overboard and struck by the boat’s propeller and three other activists were injured.

The Spanish Navy claims boats were only sent to stop the activists boarding oil-drilling ship, the Rowan Renaissance.

After the incident, crew aboard the Arctic Sunrise, had been told to leave the area by the navy.

But captain Joel Stewart said: “We will not allow reckless oil drilling by the Rowan Renaissance in these deep waters. 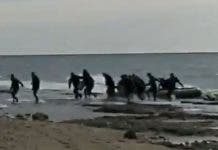 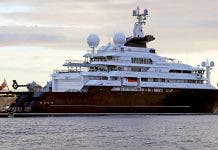 Superyacht owned by Microsoft founder and on sale for €300 million, docked in Spain’s Andalucia