SQUEEZED amid the competing gypsy barrios of Santiago and San Miguel in Jerez, you will find numerous ‘tabancos’, ‘penas’ and ‘tablaos’ (types of venue)  throbbing to the beat of authentic flamenco.

Indeed, there are no better areas in Spain to discover this exuberant art form at its purest, drawing aficionados to their authentic and colourful interiors.

These are, after all, the historic streets where many of the country’s most famous flamenco stars were born and raised.

After UNESCO recognised flamenco in 2010 as part of Andalucia’s rich cultural history, it is fitting that the barrio of San Miguel is being promoted as a hip new flamenco zone.

At both ends of the district you will find statues of its two most famous stars towering over the streets.

The first is of La Paquera de Jerez, a renowned flamenco singer whose statue evokes the deep passion she sang with.

Dubbed the ‘Queen of Buleria’, she was known for her deep, clear timbre and her ability to tackle many styles, in particular ‘deep song’ (cante jondo).

Then, of course, there’s Lola Flores, who was born in the city, before taking her unique form of singing and dancing to the world and becoming an icon of Andalucian folklore.

The home where she was born is now a museum and can be visited at Calle Sol 45, draped appropriately with the Andalucian flag and a ‘manton’ or shawl, typical of flamenco.

Her nearly four metre tall, 600kg bronze statue erected in 2003, is on Ramon de Cala where there have been plans to open a Lola Flores museum, which so far have come to nothing.

Angel Villaescusa, the owner of the charming (and incredibly authentic) Apartamentos Jerez hotel, next to the statue says: “The area is really coming up and becoming much more visited on the tourist map. We are keeping our fingers crossed that the town hall opens the museum.”

He continued: “Both districts are steeped in flamenco, but quite different in style. San Miguel is more elegant, while Santiago is more raw and where your heart will bounce from the music.”

His concerns about the museum, could equally be laid at the grand plans which would have seen the so-called City of Flamenco open in the heart of the old town.

Designed by famous Swiss architects Herzog and De Meuron, this planned museum, school and auditorium, would have been a wonderful focus for the city had it not been put on permanent hold due to continuous political ramblings and allegations of money syphoned off by the wrong authorities. Currently it is a giant hole in the ground and a massive eyesore.

One place that is thankfully open is the Andalucian Flamenco Centre, in the Permartin Palace on Calle Chancilleria, which documents, conserves, researches and promotes flamenco.

From here you are just a few twirls into the barrio of Santiago, which is also very much steeped in flamenco history. 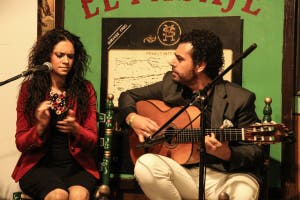 This is epitomised by the bust of Fernando Terremoto, one of Jerez’s greatest Seguiriya singers, beside Santiago church.

Made by local artist Nuria Guerra, it honours local legend ‘Terremoto, while another nearby bust honours Tio Jose de Paula, who in the early 20th century sold snuff and sweets from a basket on the streets and later at night vented his frustrations through flamenco.

The prominent Pena Flamenco Tio Jose de Paula was founded in his memory and hosts lectures and shows.

Adjacent is an unassuming white-washed house which was the birthplace of guitar maestro Javier Molina, who started strumming at the age of seven and inspired a whole generation of stars.

Understandably, Jerez is considered to be at the heart of gitano (gypsy) culture which has interwoven itself so heavily into city’s fabric.

Gitanos, the Romany people of Spain, are said to have emigrated from northern India, reaching Al-Andalus – Islamic Iberia – between the 9th and 14th centuries.

Indian influences, blended with Andalucia’s already hybrid culture, greatly affected the evolution of the genre and even the traje de flamenca is based on dresses originally worn by gitanos.

The gypsy community was well treated in Jerez and mingled with the ‘Moriscos’ – Muslim Andalucians who were forced to convert in the 16th century and subsequently ordered to leave Spain. Many stayed and mixed in with the gitanos.

The revolutionary politician and author, Blas Infante, even suggested in his book The origins of flamenco and the secret of deep song, that the word ‘flamenco’ came from fellah mengu, which means ‘escapee peasant’ in Arabic.

There are a multitude of flamenco styles but buleria and seguiriya are its backbone and are typical of Jerez, supposedly hailing from it.

Buleria is one of the most popular forms, picked up by the virtuoso Paco de Lucia and legendary vocalist Camaron de la Isla. It has a fast tempo and a boisterous and joyful air, full of ‘alegria’.

Seguiriya is flamenco ‘puro’, one of the oldest styles. The sparse lyrics and music are steeped in tragedy and lament, reflecting the suffering of human relationships, love and death.

Another more seasonal style and very typical of Jerez is the zambomba which is performed from the start of the Christmas season.

It gives the city of Jerez a unique flamenco twist during the run up to the festive season, coming from the instrument, the zambomba – or friction drum.

There is no better place to appreciate the influence flamenco has on the city than at Tabanco El Pasaje, where I watched singer Isa Fernandez take command of a packed room.

As the tempo increased and guitarist Juanpe Carabante played his instrument more vigorously, the crowd joined in with claps and ecstatic cries of ‘Eso es!’ (That’s it!).

Soon there were three children taking their turn on the stage, their moves measured, their faces proud as exclamations of ‘Ole!’ urged them on.

“Flamenco is something you’re born with, you live it daily”, Juanpe told me, after the show.

It’s a sentiment echoed by everyone you meet in Jerez. Flamenco is more than an art form. It’s a way of life.

SPAIN’S ROBIN HOODS: Retracing the steps of famous Andalucian bandits who took from the rich and gave to the poor