IT is a solemn and strange scene to behold.

Priests lying flat on the floor of Granada Cathedral, begging forgiveness for the sex abuse sins of the Catholic church.

But it is a necessary scene, very necessary, for this institution has been a fertile breeding ground for paedophiles, undoubtedly exacerbated by rules against sex and marriage.

Having said that, we cannot tar all priests with the same brush, for it is individuals to blame, not a religion.

It is now up to the Catholic Church to be open and honest about these scandals, to join in the fight for justice, rather than covering it up. 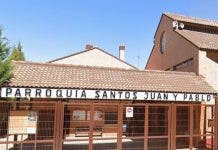