SPANISH energy giant Repsol has abandoned its oil and gas exploration project off the Canary Islands.

The controversial project – which has faced fierce opposition from environmental groups and residents – only found small deposits that were not worth drilling.

“The prospections have confirmed that gas and petrol have been produced in this basin but the deposits discovered are saturated with water and the hydrocarbons present were in very fine layers that are not exploitable,” said the group in a statement.

Repsol began drilling on November 18 at three locations just 50km from the islands of Lanzarote and Fuerteventura, off the west coast of Africa.

The search was authorised by Spain’s Industry Ministry in August, but green groups have been protesting the decision ever since.

It was feared that the prospecting would harm local flora and fauna – including dolphin populations – and disrupt the vital tourism industry.

But the government insists that Spain – which imports nearly 80% of its energy – can no longer afford to hold back business or waste natural resources.

Repsol made no comment on the planned prospecting off the Mijas coastline, which is due to start in February 2015. 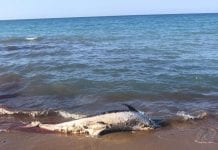