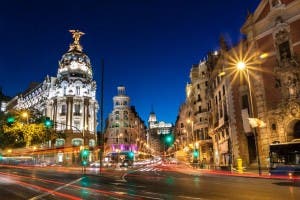 Founder of Inditex – which owns Zara – Amancio Ortega has bought number 32 on Madrid’s Gran Via, valued at a cool €400 million.

The self-made billionaire is now effectively the landlord of rival clothing companies like H&M, Mango and soon even Primark.

Irish clothing retailer Primark is to open a three-floor, 9,000m square flagship store in the nine-storey building designed by Teodoro de Anasagasti in 1924.

A statement from Drago Capital read: “Reinstating commercial use to this building will enable the revitalisation of the area as one of Madrid’s major commercial arteries, and will help restore adjacent streets and boost the economy of the area.”

Ortega, the world’s fourth richest man according to Forbes magazine, with an estimated €55,19 billion net worth, already owns the iconic Torre Picasso in Madrid and snapped up the headquarters of mining multinational Rio Tinto in London’s St James square for €315 million this month.