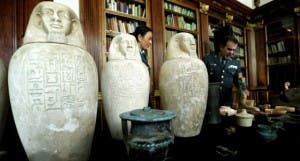 A EUROPE-WIDE crackdown on cultural property trafficking has led the Guardia Civil to recover 36 Egyptian artefacts valued at €300,000 in Valencia.

In a press conference at Madrid’s National Archaeology Museum, antiquarian Captain Javier Morales said the most valuable piece was the bust of Egyptian goddess Sekhmet – worth an estimated €100,000.

Late last year, Operation ‘Hieratica’ retrieved the haul at the Port of Valencia from a shipping container from Alexandria, Egypt.

Five people were arrested in Spain – four Egyptians and a Spanish antiquarian – and two intermediaries in Egypt.

The items – hidden in cheap vases – are believed to be loot from the ancient Egyptian Saqqara burial ground and ruins near Mit Rahina.

“It’s necessary to be sensible within the European Union to stop the traffic of goods such as these, not only because they favour warlike conflicts and terrorism, but because they are part of the culture of the country from which they have been robbed,” he said.

More than 2,200 stolen artefacts and 35 suspected traffickers were seized across 14 countries as part of the whole Europe-wide action according to Europol.