THEY have come from all over Spain and from all walks of life – the young and the not-so-young – spilling into the capital by car, on foot and from 260 buses laid on for the March for Change in Madrid.

Everyone is fired up to paint the city purple.

As many as 300,000 people are gathered in the Spanish capital to march behind the General Secretary of the party Pablo Iglesias and deliver their blunt message to Moncloa in the year of Spain’s regional and national elections. It is simple and to the point: “Es Ahora” (‘the time is now’).

The route takes the river of people – one of the biggest marches ever seen in Spanish history – from Plaza de Cibeles for a political rally at Puerta del Sol, the same place where the Indignados protest movement began in May 2011 and better known as 15M.

Deafening chants of ‘Pablo Presidente’ and ‘Si, se puede!’ (yes we can) ring out through streets that are alive with the optimistic feeling of change.

It is an incredible mood and plenty of people – pensioners, well-dressed women and students alike – are actually crying with excitement at the prospect of being so close to their hero.

Although Podemos is just one year old, its leader Pablo Iglesias has harnessed an estimated 30% of votes with his passionate purple PR campaign. And right now, in Spain, he is about as near to being idolised as a rock star or Hollywood screen idol as it is possible to be.

I’m here to see politics’ new political darling in the flesh and experience the build up to a protest that marks, almost a second coming.

Arriving in the city on a very early morning train the day before, my first stop is Podemos HQ. It’s nothing like I imagined, squeezed into a tiny room at the base of a block of flats in one of the capital’s edgy working class barrios of Lavapies.

Except for the purple posters plastered over the windows it could be a dingy nightspot, with bearded Madrileños in battered denim jackets smoking outside.

I nervously push open the door, expecting secretaries, a bank of computer screens and a hostile welcome for turning up unannounced and demanding a tour of the party’s official headquarters.

The reception could not have been more different.

‘Journalist, come in, come in!’ volunteers call to me, as I make my business known. ‘Make yourself at home’.

I take them up on the offer, settling in for a good couple of hours, chatting to them as they hurry about with the last minute preparations for the next day’s march.

These friendly volunteers, a totally mixed bunch, are summed up by Aaron Garcia Pena, a 37-year-old poet who has been volunteering with Podemos since before the European elections in May, when Podemos gained an unexpected 8% of the vote.

“Podemos is about recovering words that have been lost in Spain,” he tells me. “Words like patriotism. Our flag and the flag of Spain, they are for everyone.”

Podemos provided a lifeline for Aaron after he lost 90% of his teaching work to the austerity cuts over the last few years. But he has high hopes for the future, and for the restoration of Spain’s society and culture.

“Right or left is not important, what is important is recuperation. This is Podemos.”

Businessman Paco Remedo, 60, is a surprising volunteer. Formerly running eight bars in the city, he has given it all up to help the party, subsisting on very little money.

Surprisingly, he doesn’t seem to care too much about whether they win or lose November’s elections.

“I don’t know if Podemos will win but for me that isn’t important. The most important thing is that people are finally standing up and demanding change.

“In many ways I think it will be better if we don’t win, it will give us more time to get properly established and sort out some of our internal arguments.”

The atmosphere in the cramped office is charged with excitement, like preparing for a party as more and more volunteers turn up to help assemble the thousands of flags that have only been delivered that morning.

“We are going to fill the streets, and we are going to paint Madrid purple,” enthuses Puerto Rican environmental lawyer Geraldo Portela, 33. 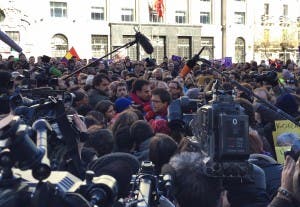 One thing very clear to me after a couple of hours at HQ is that every Podemos member is well versed in speaking to the press.

Several groups of journalists stop by, from various television stations and newspapers from across Europe, all taking advantage of Podemos’ open-door policy.

Each team gets an obligatory flag-wave and a chant of ‘si se puede’.

I hear Geraldo mutter about it being ‘such a cliche’. But it’s exactly what the cameras are looking for, and the journalists, who mostly leave within 10 minutes of arriving, all seem satisfied.

And it’s not just the volunteers who are so media-friendly. Throughout its climb to popularity, Podemos has exploited the media more adeptly than any of its political rivals.

The purple branding, the soundbites, the flag-waving, it’s just what the media loves to feed on. Podemos throws it, the media devours it!

We have seen leader Pablo appear in various guises on countless television chat shows, shooting basketball hoops on El Hormiguero one minute, looking straight-laced and serious the next.

But while its powerful public presence has earned phenomenal support, it has its harsh critics too.

A number of people I spoke to over the weekend complained of a mystery surrounding Podemos, for all its talk of transparency.

“I think there’s a lot that we don’t yet know about Podemos,” said Martin Delfin, a journalist for national daily El Pais.

“Stories have come out against them but are almost always deflected away before all the truth is known. About the leaders’ former contracts in Venezuela, about the money they make … But what’s really interesting is the connection that Esperanza Aguirre [the PP leader in Madrid] has made between them and ETA.

“There are a lot of rumours surrounding them, and I think we are going to see a lot more coming out before the elections, as there’s definitely something lurking underneath. What’s certain is that this year’s elections are set to be very interesting.”

Change is the word of the moment, and for many it’s not so much Podemos that’s the attraction as the chance to vote for a party that isn’t part of the two-‘caste’ system – of the ‘Casta’, which has become the buzzword for Podemos-wonks.

For the last 20 years, the PP has claimed victory in Madrid while, across the country, the PP and PSOE have bounced victory back and forth since dicator Franco’s death. Andalucia has known nothing apart from socialism, with the PSOE being in charge for a full 35 years.

“I will vote for them because I want change, but I do have my criticisms,” explains computer programmer Pablo, who has lived in Madrid for nearly 10 years.

“They are riding a wave of feeling and for me politics shouldn’t be about feeling but about pragmatics. There is a lot of emotion surrounding the party, but a lot of what they are promising does not seem realistic.”

Back on the police-cordoned streets of Madrid on Saturday morning, I join the crowds flooding into the Plaza de la Cibeles, feeling just a little bit sceptical. There are people everywhere, clinging to lampposts and climbing up fences and trees to get a better view.

I find a lookout point in a crowd of people balancing atop a stone podium, and can finally take in just how far the crowd stretches in all directions.

Next I make my way into the media zone just in front of the start of the march, which is set to leave at 12, but in classic Spanish fashion didn’t leave till around 12:45.

The atmosphere is electric, with hundreds of camera crews and journalists jostling for position.

Suddenly a whisper goes around that Pablo’s arrived and everyone goes nuts.

No one’s exactly sure what’s going on but it’s as if Elvis has arrived! Such is the extent of public fascination with the party’s oh-so charismatic leader.

It turns out he’s hiding in the crowds, ducking in and out of view like a bizarre game of Where’s Wally, and the media rabble gets deflected. Everyone’s going on hearsay, and some of the waiting crews are insisting that Pablo’s not here.

There’s a wave of disappointment until the crowd parts and everyone sees his face, looking uncannily cool and relaxed, considering the pressure he must be under.

That tranquillity pervades throughout the march, despite the crush of people desperate to see his face and snap a photo as he walks past.

And it’s not just the media. People from all across Spain are lined up along the route, all shouting for Pablo, trying to make him look their way.

It’s impossible not to get caught up in the fanaticism. ‘Pablo, Pablo, give us a wave for the expats!’ I shout, and with a glowing smile, he dutifully lifts his arm.

Podemos is driven by this cult of personality, a genuine love for Pablo Iglesias and for his promises of change.

Whether he can deliver or not, remains to be seen, but in world politics this is one of the most amazing success stories.

It has been an extraordinarily fast journey to get here, and, while the road to the November general elections is riddled with potholes… the march for change is very much underway.

Whatever happens, Spain has become a much more positive, optimistic place because of them.

Jorge Hinojosa - 12 Aug, 2022 @ 13:45
Queen Letizia, King Felipe VI and their daughters have been staying at the Marivent palace for their traditional summer holiday. But while Felipe flew...