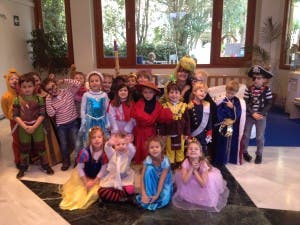 IT has been an interesting new year at BSM, with some rather strange goings on…

In the second week back, some unusual markings were found in the Primary playground – a collection of green circles and mysterious rings.

As soon as the matter was brought to my attention, I made it my mission to solve this weird mystery. Our children are far too well-behaved to graffiti their beautiful school and the teachers – well it goes without saying that they played no part in this – so I couldn’t understand what had happened.

The following day, gold rocks with green slime strangely materialised inside the circles – the plot thickens…. With the help of Year Two, we came to the only rational explanation available to us – that the school had been visited by aliens!

The Y2 children left some food out for the visitors and discovered that the aliens liked chicken, but not bananas (one child did suggest that maybe they did not realise they had to peel them). The rocks have been sent to NASA for analysis. We will let you know the outcome.

But that’s not all! One Monday morning in January, the Reception children came to school to find a giant bowl, a giant spoon and a giant set of keys had been left in their classroom and the big hand chair had gone missing!!

They came to the conclusion that a giant had been in school over the weekend and had taken a shine to the chair so took it up to his giant house at the top of the beanstalk. The children wrote some lovely letters asking for the chair back, but so far he has not returned it. Here’s hoping.

Just when school seemed to be returning to normal, it was invaded by more than 150 book characters!
Well, actually there is an explanation for that – it was the last day of Book Week. After a week of writing stories, designing book covers, sharing favourite stories, big children reading to little children and entering various competitions, everyone was invited to come to school dressed as a book character.

Everyone looked great in their costumes, the teachers too. The ‘Book in a Box’ competition entries were amazing, the children worked very hard on this home project with super results.