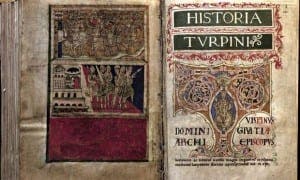 AN electrician has been sentenced to 10 years behind bars, after he stole a priceless 12th century manuscript.

Manuel Fernandez Castineiras was sentenced for crimes including the theft of the manuscript – the first guidebook to the Camino de Santiago – the theft of money, other documents and for money-laundering.

Police recovered the manuscript in July 2012, more than a year after it went missing from a safe in the Santiago de Compostela cathedral.

Known as the Codex Calixtinus, Castineiras had hidden the 225-page document – which was found in a ‘well preserved’ state – among newspaper in a bag in his garage.

His wife was also sentenced to six months for money-laundering, and each will have to pay a fine of €268,000.

The document – which dates to around 1135 – is a compilation of a collection of texts including sermons, homilies to Saint James and practical travel advice to pilgrims.

Although it was formerly attributed to Pope Callixus II, scholars now believe that the pope’s name was only used to lend authority to the compilers’ work.

IN PICS: Take a look at Spain’s extraordinary scrap cathedral built entirely by one man