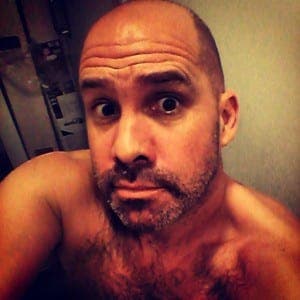 OSCAR Wilde once said that a man should try everything once apart from incest and folk dancing. Had he been alive and well and living in 2015, he might have also added, ‘and should never get naked for a charity calendar’.

Yes, you did read that correctly, dear reader, and sorry if that just put you off your bacon buttie.

The reason that I agreed to strip off was all in the name of charity.

Friends are involved in the Last Chance Animal Rescue, which finds foster and permanent homes for abandoned animals. So when they asked for volunteer models for a charity calendar, I thought that I’d give it a go.

Kara, the calendar organiser, said that they had 23 of the coast ‘s most beautiful girls and hunky guys who were all going to look sexy yet tastefully-clothed due to their good looks.

In my case, however, they were going to have to go full nude…

I blame social media. A few years ago I climbed Marbella’s emblematic La Concha mountain, and in an impromptu celebration to mark the occasion, decided to strip naked at the peak. The resultant photo (shot from behind I hasten to add) went viral among my friends and got me some very strange propositions, many of which would have shocked Oscar.

Photographer Rebecca had seen the shot, and decided that she wanted me to do something similar at the Casita. As it was, I couldn’t really complain, especially as it was for charity.

But first I had to undergo a few beauty treatments before the shoot.

These included having errant patches of hair waxed from my back and a full-body spray tan. I’ve never had this done before and all I can say is that if you ever want me to confess to a crime I didn’t commit, threaten to wax my chest.

And to all the ladies who have waxes on a regular basis, I salute you.

A few days later, the shoot itself took place. The team behind the shoot was thankfully quite small, and Fletcher the rescue dog was totally unphased by the whole experience.

I was pretty much the same although, as I stood totally nude in the rowing boat while the photographer snapped merrily behind me, I was struck by the sage thought that if you want to get the best out of life, you have to do some crazy stuff every now and then!

You can find out more on Facebook at Last Chance Animal Calendar or by calling Kara on 672 575 644.

And I’m Mr February, by the way!