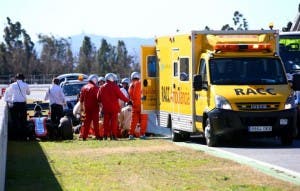 SPANISH Formula One driver Fernando Alonso ‘woke up in 1995’ after his Barcelona crash, unable to remember anything past the age of 13.

The 33-year-old suffered a shocking memory lapse after crashing his car during pre-season testing at Barcelona’s Circuit de Catalunya on February 22.

But it has now emerged that he woke up believing the year was 1995, when he was a 13-year-old pupil at Holy Guardian Angel School in his home town of Oviedo, northern Spain.

When asked who he was, Alonso replied: “I’m Fernando, I drive go-karts and I want to be a Formula One driver.”

He was unable to remember his debut with Minardi in 2001, or his world championships for Renault in 2005 and 2006.

The McLaren driver suffered a concussion following the crash, leading to a three-night hospital stay in Barcelona for testing.

But fears are circulating that the crash could be a result of an underlying condition that could threaten his future career – such as arrhythmia.

Alonso has already been ruled out of competing in the opening race of the 2015 F1 season, in Melbourne, Australia, on March 15.

McLaren has also made no assurances that he will return to driving in time to compete in the Malaysian Grand Prix, in Sepang on March 29, although he has reportedly begun training.

McLaren insists that the ban is only a precautionary measure, as doctors fear a second knock on the head following his concussion could kill him.

But Dr Rafael Blesa, the director of the neurology department at the Sant Pau Hospital in Barcelona, insists that the explanation makes no sense.

“For the team to cite this reason to justify the kid not racing next weekend makes no sense in this specific case,” he said.

“Basically because, as they explain, all of the tests that were carried out on him came out okay and show that he has suffered no injuries.

“In that case, the brain is completely intact, just the same as it was before the accident. In no case would that first jolt have any effect should there be a second.”

Gary Hartstein, Formula One’s former chief doctor believes the most probable reason for Alonso passing out would be arrhythmia (an irregular heartbeat), for which Alonso would require a pacemaker.

He added that another possible reason for the crash would be a blackout, caused by carotid sinus hypersensitivity (pressure on the main artery to the brain causes the heart rate to drop, blood pressure to fall and the sufferer to blackout).

The exact reasons for the crash are yet to be established, although the suggestions are strong winds, driver error or mechanical fault.