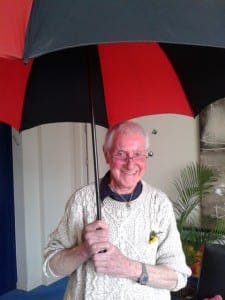 I HAVE been spending a lot of time at the Casita recently, mainly due to the fact that ‘Team GB’ has yet to find a suitable replacement for the long dead Freelander – so I am car-sharing with my long-suffering father.

Although I may feel smug, as I gaze down from my environmental high ground, that I have reduced my carbon footprint dramatically, the downside is that there have been more than a few head-slapping moments – a la Homer Simpson – when I discover that I forgot to buy milk on my last shopping trip.

The village is five km away and involves scaling my Indiana Jones-style track to get to it. I have been considering purchasing a donkey.

The worst thing to forget, however, is cat food, as it inevitably means that 50 Shades (my cat – in case you are wondering and, no, I haven’t taken her to see the movie) will slope off in search of prey, normally dispatching some poor rodent or bird and bringing it back to her favourite place in the Casita to devour. Which is, of course, under my bed…

Some creatures get lucky, and regular readers will know that in the past 12 months I have managed to save a tiny dormouse, a baby rabbit, a more-than-confused bat and, most memorably, a partridge, from their fate.

I have no grounds for complaint though. After the recent rains the lake is almost full, and the warmer weather means that I am writing this article on my terrace. But I was struck by a thought this morning. I still haven’t been able to locate the leak in either the water tank or the pipes, which means that I have to fetch water from the lake every day.

As I did this at the break of dawn, having already lit the fire in the living room and candles around the house, I realised that I am basically living in the 13th century.

I’m fully expecting angry villagers to turn up any day now with flaming torches to have me burnt as a warlock.

THE coast lost one of its best-known and best-loved figures in February with the death of Jack Nusbaum.
I knew Jack well from various media lunches and events, and he was always great company.
Jack was also a frequent caller on my Sunday evening radio show, although one time he did surprise me by asking me to play Justin Bieber. “My grandkids are always going on about him” he explained.
So, for the first, and I hope the last time, I played ‘Baby’. As soon as the song ended the phone rang and I put the caller live on air.
“Hey Giles, buddy, this is Jack” came Jack’s distinctive American accent: “That Justin Beiber record you just played? It was CRAP!!!”
RIP Jack!