A CONVICTED killer who was on the run has been detained by Spanish police in the Canary Islands.

Shane Walford was arrested just five days after his named on a list of Britain’s 10 most wanted fugitives.

The ex-soldier and former boxer killed Paul Gibbons, a father-of-two off-duty fireman, with a single punch outside a bar in Coventry in 2010.

He was wanted after he broke the terms of his bail.

Walford and nine other men featured as part of the Operation Captura crackdown on British fugitives thought to be living in Spain.

They are wanted for crimes including rape, child sex attacks, manslaughter and drug trafficking.

Inspector Olga Lizana, head of Spain’s fugitive unit, said the ‘easy life’ offered to runaway criminals is not on offer in Spain.

“There’s a big British community with its own schools, doctors, supermarkets and everything else,” she said.

“You don’t even need to know the language, so it’s a good place for them to come and hide.

“But we are catching more and more, so it is not a safe place for them to be.”

Operation Captura appeals have helped bring 65 out of 76 suspects to justice in the UK.

Anyone with information can contact Crimestoppers by phone free and anonymously from Spain on 900 555 111. 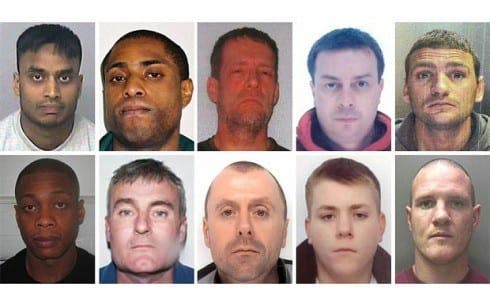