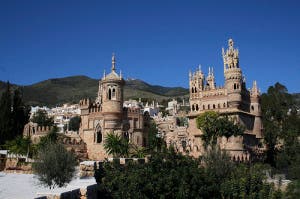 IN Benalmadena, being a ‘guiri’ has taken on a whole new meaning.

The derogatory term for foreigners has been turned on its head by the legendary ‘Guiri Army’, Malaga FC’s die-hard British expat fan group.

As a prelude to every home game, this motley crew gathers in the seaside resort before heading off to Malaga on their personalised bus to cheer on the Spanish football team they have made their own.

This is not the behaviour of your average British guiri, more likely to be seen sporting flip flops and Union Jack shorts and checking the Premiership scores on his iPhone.

These are the actions of integrated expats who have become a part of local Spanish society… and don’t they just love it!

That’s Benalmadena all over, a cosmopolitan triple decker sandwich of a town which welcomes Arroyo de Miel and its buzzing Benalmadena Costa into its warm municipal embrace.

All this rolled into one, means one key thing: there really is something for everyone. And guiris especially, as the Moors discovered when they invaded the Iberian Peninsula centuries ago, bring huge prosperity to the pueblo in the hills where Benalmadena’s story began.

The Muslims helped develop agriculture, introducing sugar cane, figs, grapes and mulberry trees from the East during the 11th century, when the local population was concentrated within the pretty walled town.

But that’s another story. My own journey began above the pueblo, with the monument that you can’t help but notice every time you drive along the A7 coast road: the Stupa.
Looming above the sprawling town, this striking Buddhist temple was built 12 years ago, a reminder of Benalmadena’s multicultural nature.

The final project of Buddhist master Lopon Tsechu Rinpoche (another guiri), it was inaugurated in October 2003.

At 33 metres tall, the Stupa is the largest of its kind in Europe and the peace and harmony it promotes is enhanced by the panoramic views of glistening Mediterranean waters lapping against the shores below.

And if the temple leaves you feeling a tad too mellow, the Mariposario, or butterfly park, across the road will soon have you all-of-a-flutter.

More than 1,500 exotic butterflies dwell within the walls of this Thai temple-cum-tropical paradise, flitting nonchalantly between waterfalls and windows, flowers and foliage.

But don’t linger too long, as there are other worlds to explore below, not least a pueblo to rival any in Andalucia with its enchanting, sugarcube houses and flower-filled streets.

But the highlight of any trip up to the village has to be the wonderfully bizarre castle, built just 22 years ago in honour of Christopher Columbus and the New World explorers.
Castillo de Colomares (pictured, page 17) would be at home in Disneyland with its fairytale turrets, but it was here that Doctor Esteban Martin, a talented amateur architect, erected his masterpiece.

A flight of Gothic, Byzantine, Romanesque and Mudejar fantasy, whose ornate towers and spires rise skyward like an illustration from a Grimms’ fairy tale, the castle took seven years and many millions of pesetas to build.

A replica of one of Columbus’ ships – the bow of the Pinta, jutting surreally from the walls – hints at the real reason for the existence of this curiosity.

It was inaugurated in 1992 by the last descendant of Columbus, with a mass held by a priest from Palos de la Frontera in Cadiz province, the port from which Columbus set sail.

Heading down from here, you arrive in Arroyo de Miel, a very different proposition where the action really starts to get going.

A town in its own right, Arroyo boasts the coast’s number one amusement park, Tivoli World, with some 40 rides and a whole variety of shows. Tivoli is one of the highlights of any trip to Benalmadena, whether the parents like it or not!

Unless they suffer from vertigo, they’ll definitely prefer Benalmadena’s most iconic tourist attraction, one that can be seen from miles around.

The Teleferico cable car ferries hundreds of people each day over the A7 and up to the peak of Mount Calamorro, where you’ll be rewarded with more than just spectacular views. Various shows take place at the summit throughout the afternoon, including galloping horses and falconry displays.

It’s fair to say that if you try out everything Arroyo has to offer, it will be days before you even make it down to breezy Benalmadena Costa.

This is the beating heart of the town, blossoming out from big beautiful La Paloma Park with its endless gardens (all 20,000 square-metres of them) and scenic swan lakes which are home to many other visiting bird species.

An oasis at the centre of the metropolis, the park is a favourite with joggers and those who need to retreat a while from the racy pace of the paseo, Benalmadena’s bar-lined seafront.

If you’ve got this far, it’s definitely time for lunch. And for good food, great beaches and a buzzing atmosphere, the 2km seafront is right where it’s at.

From Benal Beach to the port, an eclectic range of bars, restaurants, cafes and shops compete for your attention. With a coastline spanning almost 10km, there’s a playa made to measure for you and your family, whether you prefer quiet coves, sporty beaches, somewhere close to a chilled beer or even if you like to get naked on the naturist ‘strip’!
Me?

I prefer the one near the Arabic-style Bil Bil castle, its red walls flanked by cool fountains shimmering in the sun’s rays. Built by a Frenchwoman in the 1930s, today it’s the picturesque setting for concerts, exhibitions and weddings.

One place that is always busy is Minigolf Benalmadena, where manager Mark Tyndale, 28, is constantly on hand. “I love Benalmadena because it is so friendly,” he says. “I’ve always lived here and it really feels like home.”

Back from the beach, Calle Bonanza is the social hub. It’s here, in the Lounge Bar, that the Guiri Army congregates to practice their chanting in support of Malaga FC.

While, for the young and hip (but maybe not the parents), there is nowhere better than neighbouring Ibensa Square to spend a sunny afternoon with friends in one of the many vibrant bars.

But the jewel in Benalmadena’s crown is, undoubtedly, Puerto Marina. There are many reasons why it has won the ‘Best Marina in the World’ award more than once.

Distinctive for its Moorish-style architecture, its minaret-shaped domes are so like swirls of Mr Whippy ice cream, they cry out to be topped with a Cadbury’s Flake.

The serried ranks of designer boutiques, bars and restaurants cluster around artificial islands of apartments reached by oriental bridges and there’s always an upbeat vibe.

The restaurants in the port do a roaring trade day and night and you’ll find some of the best places to eat fish here.

After dark, when a myriad of lights twinkle along the waterfront, and the trendy outdoor disco pubs pump up the volume, the port really struts its stuff.

The parents might not like that either but order them up another cocktail and they’ll soon be dancing the night away ’til dawn.