THEY think I don’t understand their language. Well it’s very convenient to let them think that because it means I hear all kinds of things.

One word I love is ‘groups’. I don’t know why it is but there are always leftovers with groups. Usually it’s half–finished pieces of chicken, pork or beef and that’s all great and delicious.

But occasionally I hit the jack-pot. Recently a group of 30 people ordered a paella.  The hotel paellas are good – nothing out of a Vesta packet here says the Great Master showing his age.  I’ll be honest though, I prefer the mixed ones to the seafood or vegetarian varieties but dogs have to conform.

So 30 diners are confirmed on the morning of the event and the chefs are busy preparing a couple of real beauties to feed the mass. There’s likely to be something left over. Omens are good.

But it gets better. When when they arrive, 10 of them have decided not to come because they are staying in Ronda to shop.  Great Master is happy because they are going to pay for the whole group anyway and I am ecstatic because it’s a paella bonanza for a dog.

A whole 10 portions to myself – over a few days of course and mixed with those pellets that I’ve never seen THEM eating but which form most of my sustenance day in, day out.

So paella it was. I eat the whole prawns with gusto,  well they are very fiddly to peel.  There’s only two things that I leave – mussel shells and clam shells. The highlight of my year so far.

So go on… organise a group to visit Molino del Santo.  I’ll be your undying fan. 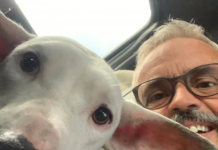