THE seductive cobalt blue macarons with a subtle gold leaf taint were as melt-in-your-mouth delicious as one would expect from world-famous Ladurée patisserie in Covent Garden or Paris. 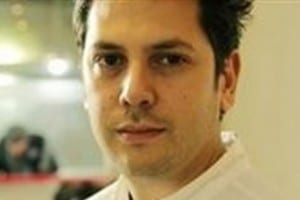 There was only one major difference: These were savoury and filled with the black pudding of a sturgeon.

But there is nothing ordinary about the restaurant of Andalucia’s chef-of-the-moment Diego Gallegos, 31.

Recently crowned ‘revolutionary’ new chef of the year at prestigious Madrid Fusion, it was little surprise to discover him snapped up by the Hilton group for their new hotel based at La Reserva de Higueron, in Fuengirola.

This young Brazilian is on a fast trajectory to greatness and the new guise of his stylish restaurant Sollo is going to be one hot ticket this Summer.

Aside from the fact that there are only 16 covers inside and 24 outside for warm evenings, this is one meal you are unlikely to taste anywhere else in the world.

For starters it is entirely fish based – and ‘sustainable’ fish, to boot – and secondly, it is mostly fish you rarely try and parts of the fish you probably didn’t think you wanted to try.

And then there is the attention to detail; the driftwood on which the food is served, the attractive presentation and the seductive lighting and settings of the dining room.

Now sit down and prepare to be entertained.

For the first key thing to know about Sollo is there is no menu… you get what you are given in a dozen course menu degustation, which changes only once or twice a year.

There is a decent wine list, of course, and one thing you can be guaranteed of is lots of caviar, which won’t suit everyone, but was a major plus side for me.

This is all thanks to Diego’s other guise as the resident chef and public face of Riofrio caviar, an organic product from Granada, raved about by chefs including Gordon Ramsey.

Diego uses it – and the mother fish, the sturgeon – in many different guises and in around a third of the dishes.

The real stand-out was the ‘milhojas’ of caviar and cream, which was both sweet and salty and looked like a million dollars. But the cabbage with caviar of salmon was also good, as was the pork-scratching-style sturgeon skin.

I particularly liked the cerviche of tilapia, a river fish caught near Ademuz, in Cordoba, while a trout tartare, also from Riofrio, served with beetroot was delicious.

I first met Diego cooking in the wonderful Casa Piolas in the tiny village of Algarinejo in the heart of Granada province some five years ago, and it was obvious he would go far.

Now aided by his friendly girlfriend Suzanna, also 31, who is maitre d’, he has an uncanny knack for creativity and is a huge fan of sustainability and local ingredients.

If proof were needed, he dragged me off on a strange stroll through the bowels of the hotel and into the grounds, leading me to a far corner of the plot.

Here, he proudly showed off his new ‘huerta’ (vegetable garden) where he is planting around 100 herbs, spices and vegetables – and expects to provide enough for his diners, in season.

As for expansion and why he only wants to cook for, at tops, two dozen people at a time, he is simple and to the point: “That way I can maintain the quality and get the time to chat and explain what I do for the clients.”

Now not a lot of chefs say that!