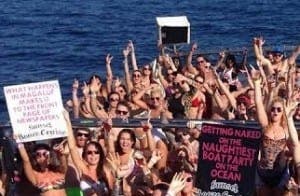 It has been revealed that ticket sellers for the cruises lure punters in saying girls have nowhere to escape once on board.

The extremely explicit content sees a woman’s bikini bottoms being ripped off by a lad as she tries to protect her modesty before he performs a sex act.

A Magaluf resident said: “The sex games are X-rated on the boats because the captains know there’s no police or security to step them.

“And there’s a free bar so these teenagers are all swimming totally off their faces.”

The Ayuntamiento has launched a crackdown and Mayor Manuel Onieva believes new regulations will make it economically unviable for drunken ‘Shagaluf’ behaviour to continue.