PRINCESS Cristina has been demanded to declare a list of assets to be blocked to cover her €2.7 million bail fee while she awaits trial. 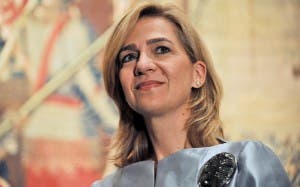 The 49-year-old princess faces up to four years in jail after being indicted for being an accessory to tax fraud, along with husband, former Olympian Inaki Urdangarin, 46.

Urdangarin and she were involved in a four-year probe which  led to charges from money laundering to fraud.

The Palma de Mallorca Judge Jose Castro has given her a deadline of Friday to present the list.

And then the court will begin to block the assets provided they cover the bail amount.

No property will be seized but the princess will be unable to sell anything.