He’s a musician, not a church minister, although the Rev Richard John has his disciples.

With a harmonica, electric guitar and stomp box stowed in his white van, he travels all over Spain, performing his captivating solo shows to small but appreciative audiences.

He’s 65, dyslexic, he can’t read music or speak Spanish and he humbly admits it took him 40 years to master the guitar.

But his concerts are full of gritty emotion, straight from the heart of old-time blues America. When audiences applaud each song, the Rev Richard expresses his gratitude with huge grins, clasping his hands together towards the crowd.

From busking in London to gigging around Spain, this very alternative wandering minstrel has found a cure for life’s blues in a cave home in Granada, where he and girlfriend Keeley live a simple, troglodyte lifestyle.

“I live in Spain because I prefer the culture here and, of course, the sun,” he says.

“This way of life suits me.”

Normally he plays on Fridays and Saturdays for a two-week period, rests and recovers for several weeks, then repeats the process.

I caught up with him in Puertollano where he was playing in a small bar called La Luna, part of a tour taking in Granada and Daimiel.

Puertollano is a small industrial town in Castilla La Mancha – companies such as energy giants Repsol have factories close to the area.

It isn’t the most glamorous of concert venues but Richard is not a man for glamour.

Although he was excited nonetheless about playing in Puertollano.

“From what I have seen on the internet it looks like a great place with a varied history and where people are very proud of their culture.”

Everyone who meets him asks, ‘why the Reverend handle?’

“It comes from The Reverend Gary Davis,” he says.

The artist, also known as Blind Gary Davis, was an influential American blues musician from the 1930s-to-70s, he explains, inspiring the likes of Bob Dylan and The Grateful Dead.

“He’s got a great voice. He was a real minister who was blind. He touched many souls with his talent and he put his money into the community,” he says.

“So I chose the name out of respect for him and his music. And it looks good in writing.”

The Rev Richard’s own musical career has been less straightforward

Born and raised in London, the blues maestro decided to sell his house and car over 13 years ago. Soon after, he saw an advertisement for a cave house in Granada. He and partner Keeley agreed to buy the property and have been living in Andalucia ever since.

Before that, he lived in different parts of London, busking and doing different jobs.

He is unable to read music and spent 40 years honing his guitar skills but it was only when a friend gave him a guitar slide that his music style really clicked.

His way of learning is different because he has dyslexia.

“I suffer from anxiety problems. I’m severely dyslexic, that’s why I can play three instruments together. People with it think differently, I think in the whole,” he says.

“I can’t speak Spanish either,” he adds. “It goes in here and nothing happens and when I try to speak Spanish it takes me three months to learn a single phrase, because I find it difficult to speak anyway.”

So how does he take care of business in Spain? That’s down to his partner Keeley, a master of all trades, arranging gigs and organizing any press. However, like her partner, she is also still learning the Spanish language.

What do the Londoners make of Spanish life?

“A relaxed culture with great beauty,” he says.

“There is something for everyone in Spain if you want to find it.”

“I love Madrid for the buzz, Cadiz for the fresh, youthful feel, Barcelona for the difference, Malaga is a crossover for everyone, Valencia for the quirkiness, especially the Fallas bonfires. The list is endless,” he says.

MTV is playing pop video hits in the bar while we talk. Does he like that kind of music?

“These bands have got a formula, a bit like football. Similar to when the back four of a team are so organized and you know which way they are going to play. It’s only when you get the genius of Lionel Messi, when things are different,” he says.

To be the blues music equivalent of Messi’s magic feet is his holy grail, a genre distinct from the world of One Direction and other pop groups.

Although traditionally an African-American style of music, the Rev Richard doesn’t see that as a problem.

“Why a white man can sing the blues like I do is a mystery to me and all my friends.”

He describes his past family life as ‘not very good’ – was this a major influence in his music?

“I used to think it was a load of rubbish that you have to have bad times to be able to sing the blues. It’s an accident, what I do,” he says. 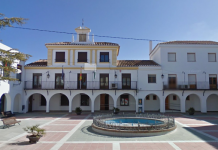