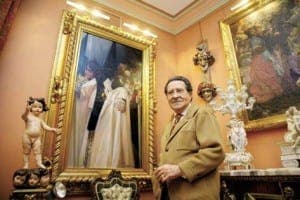 THEY say no good deed goes unpunished, and for generous Sevilla businessman Mariano Bellver this is truer than ever.

But only now has a 15-year bureaucratic nightmare finally ended, allowing him to finally hand over his eye-watering present.

Having lived in the city since 1940, Bellver made the gesture to pass on 943 items collected over half a century since he felt ‘more Andalucian than many Andalucians.’

But after hitting numerous legal brick walls he considered giving up and auctioning the collection of paintings, sculptures and furniture off for charity.

Childless Bellver said: “I don’t want money, I have never sold a painting, but I do want Sevillanos to be able to have this forever. You get more enjoyment out of giving than receiving.”

The Real pavilion will house the collection, opening on December 5 of 2016 – Bellver’s 90th birthday – after a €3 million renovation.