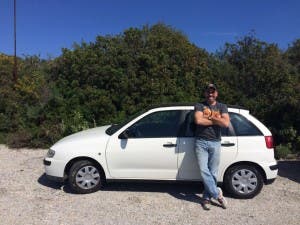 FOR the son of a racing driver of some repute who spent a large chunk of his childhood surrounded by cars, I don’t seem to have an awful lot of luck when it comes to my own motors.

You could write a ‘how not to’ guide when it came to my last car, the infamous Freelander. Every time something went wrong with it (frequently) it was expensive-enough to fix so it hurt, but not expensive enough to say, ‘Oh Freelander it!’ and take it to the scrapyard.

Until the day that it finally gave up the ghost, after I managed to crack both the subframe and the chassis. This basically meant that the bit you sit in was about to fall off the bit you drive. (I’m technical like that).

My mechanic assured me that, had this happened while I was driving, it would have sheared my legs off just below the knee, which might just have stung a bit…

Being stuck with no transport up at the Casita was not a great situation. My nearest neighbour kayaks to his house and once memorably borrowed one of my rowing boats when he brought a new sofa. I was treated to the rather surreal sight of a three-piece Swedish suite moving majestically across the water.

As regular readers will recall, however, the Yummy Mummy organised a whip-round among my friends for my birthday that raised over €1,200 for a new set of wheels. It had the added benefit of leaving me speechless for the rest of the day, a feat that previously many thought impossible.

With the cash I brought a sturdy Seat Ibiza that was recommended by all my friends as unlikely to break down and easily repairable if it did.

They reckoned without my inverse Midas touch when it comes to all things mechanical.

In the three months that I have owned said Seat, the list of things going wrong have included a faulty oil sensor that beeps when I go uphill, totalled front tyres (the track to the Casita is a front-wheel-drive killer, I have discovered), a stereo that cuts out every five seconds, driver’s door electric window stuck in the down position, petrol cap cover that refused to open (leading to a Basil Fawlty-esque meltdown at a petrol station in La Linea) and the latest one – a central locking system malfunction, meaning that I can only get into the car through the (permanently-open) driver’s side window, à la ’Dukes of Hazzard’.

Add to that the recent €200 fine from the Guardia Civil for driving on a UK licence and it is safe to conclude that I have very bad car karma!

Does anyone have a Tuk Tuk for sale?

(STOP PRESS. The water cap fell off last night on the way back from filing copy….)

Anthony Piovesan - 7 Oct, 2022 @ 13:30
Another hair-raising incident involving a wheelchair on Malaga’s roads has been captured on camera.  The person was filmed on Thursday trying to cross a busy...