KING FELIPE has stripped his younger sister of her title as the Duchess of Palma after she was implicated in a money scandal involving her husband, Iñaki Urdangarin. 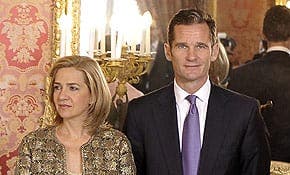 d to as ´la infanta´ – is set to stand trial in connection to tax fraud with Urdangarin.

He has become a major suspect in a massive embezzlement concerning no-bid contracts awarded to his cooperate company, Nóos Institute.

Cristina found herself caught up in the scandal due to her joint ownership of the company which supposedly collected ill-gotten funds. It is also thought she used company credit cards to make private purchases before claiming tax deductions on them.

The king’s younger sister had held the royal title since 1997, the year she married Olympic handball player Iñaki Urdangarin, although Royal sources claim that ‘the decision to renounce succession rights’ is still the Princess’s responsibility.

King Felipe allegedly telephoned Cristina to inform her of his decision. However, the princess’s lawyer, Miquel Roca I Junyent, claimed that it was Cristina herself who had renounced the nobility title in a letter she wrote in June.