THERE has been a quiet revolution in the heart of the old town of Marbella. 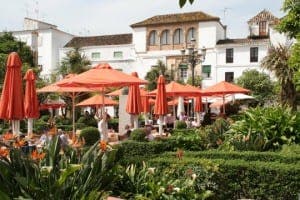 Not just in its appearance and shops, but in its incredible range of good places to eat.

As well as its very own Michelin-starred restaurant Skina, the centre has one of the finest concentrations of good restaurants in Andalucia.

Charming, candle-lit and offering increasing quality, the days when you could get away with serving any old muck are truly over.

Indeed, there are easily half a dozen fabulous places to eat in the old town, each offering its own style and flavour.

One of the most exciting recent additions to the dining scene is Italian Casa Tua in a charming cobbled street with pretty candle-lit tables.

Opened by Adriano and his wife Catherine two years ago, the Irish-Italian couple, who have two kids Viviana and Massimo, have travelled the world running restaurants in Italy, Ireland and the US.

They certainly have a lovely eye for detail and the restaurant is stylish in the extreme, using some clever ideas, such as the recycled pallet-wood planting boxes.

The menu is a nice mix of Italian classics with some original twists like the buffalo mozarella, deep fried and in tomato sauce.

A lemon-scented ricotta cheese ‘fagottino’ was creamy and delicious, while the fresh scallops with chorizo went down a treat. And, as you would expect, the tiramisu pudding was the icing on the cake.

Without a doubt though, the godfather of the centre has to be Cassanis, now over a decade old and consistently reinventing itself.

Set up by your perfect host Guy Sirre, who formerly worked for the Sultan of Brunei, it is constantly refining its cuisine and coming up with new recipes.

Set in a typical Andalucian townhouse – based around an evocative patio – there is a very distinct ambience at work.

Its head chef Fabian Cangas has been at the helm since day one, but frequently takes time out to train at different restaurants around the world.

He and his brother are firmly behind a brand new restaurant now, the stylish Cafe Flore, which is a charming spot to sit and while away a lunchtime or evening.

Billing itself as Italian ‘and more’, it is actually a splendid place to find fresh, healthy ingredients, simple salads, as well as more traditional heavy dishes such as osso bucco or crayfish risotto.

I enjoyed a ‘burrata’ of creamy buffalo mozzarella, with raf tomatoes and basil, as a starter and then a spinich and ricotta lasagna, which was healthy and filling, all part of the €14 set lunch.

To finish off I tried Fabi’s intriguing pudding ‘Financier’, which turned out to be a bakewell tart with strawberries and ice cream.

Another excellent new addition to the old town dining scene is Madre Tierra, set up by the long term Italian businessman Genesio, who previously owned a string of restaurants in Marbella, including Mistral Beach.

Sitting in an amazing leafy square, this is a wonderful trawl around European cuisine, with stylish flourishes and incredibly fresh ingredients.

No surprise that chef Miguel has cooked around Spain’s big cities, including Goizeko Wellington in Madrid and even at the Royal Palace.

I tried a fabulous tuna tataki with a tempura of vegetables and pansies on top. It was lightly seared to perfection, although be careful of the wasabi source.

The burgers come in two guises, with salmon and with beef. I had the 100% Galician beef number, which had three sources, tartare, mustard and BBQ and came in a great sourdough Italian bap.

Maitre D Massimo is very experienced and has a good grasp of the excellent wine list, which has some Italian chestnuts, and at night the place is romantic in the extreme with tablecloths and candles.

Nearby you might want to check out Yamas, possibly the only – and certainly the best – Greek restaurant on the coast.

Set up by Kulis and Hayley, the couple have invested heavily in making this a true secret in Marbella.

Set around a stunning courtyard, the menu is a trawl through all the Greek classics you can name.

Last, but anything but least, is the splendid restaurant Tempora, which just gets better and better, all thanks to its very capable Peruvian chef Aldo Espinosa, a Cordon Bleu trained whizkid, who understands freshness and spices more than most.

Naturally he served up a tremendous ceviche, with his own unique touches, that changes by the day and the freshness of the fish he finds.

Coming with watercress, cod roe and spices it was tangy but not too overbearing.