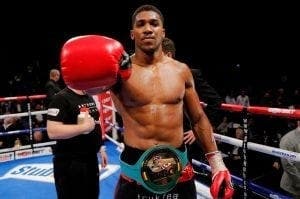 BRITAIN’S most exciting heavyweight boxer since Lennox Lewis has been soaking up the sun on the Costa del Sol.

Posing for pictures with fans, 25-year-old Joshua dined with friends before a night out at Aqwa Mist nightclub in Puerto Banus.

Former England footballer Jermaine Jenas then teamed up with the boxer and the pair were spotted go-karting in Marbella. This time Joshua had to settle for second place as the former Newcastle midfielder came out tops.

Joshua’s next fight is scheduled for September and his amateur rival Dillian Whyte is being talked about as a potential opponent.