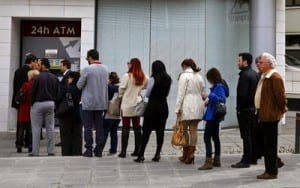 “I HATE this,” says an English colleague of mine, “and it happens all the time.”

We were queuing in a cafe in Madrid. It was breakfast time, we were hungry and had been waiting five minutes. Our turn was next.

Suddenly an elderly lady walked in front of us. She seemingly appeared from nowhere and ordered her breakfast from the waitress at the counter.

My friend was dismayed. We accepted that the lady was in her rights to be the next in line. I said to him, “la vez.” He sighed and nodded his head.

What is La Vez? Type the word into Google Translate and “time” should appear as a result.

But ask someone in Spain what it means and you might start a conversation about a traditional method of waiting in small shops.

La vez is a way of queuing in Spain, different and more flexible than the single line formation.

At first, it can look familiar. You stroll into a bank or any establishment offering a service. There is a line and so you obligingly join it.

But here’s the difference. One should ask who is last in the queue: “Quien es el ultimo?” And you might receive as a reply: “Oh, yes, a tall man with a moustache and glasses went outside. He’ll be back soon.”

This is the key to la vez. People are able to leave the queue, even leave the premises, come back and then resume their place.

Or, a person can leave the line, sit down somewhere, inside or maybe outside, and return to the queue as it dwindles.

Detailed descriptions of those last in line are important, to make sure we know who is the right person. “She had long blonde hair and a red dress,” perhaps. But don’t go over-board and find yourself saying something rude like: “The fat man with the ugly suit.”

Sometimes there isn’t even a visible line. I walked into a bank once and it seemed like everyone was sitting in a scatter graph formation. There was the semblance of a line. But as it moved towards the glory of being served next, others swept in from all directions to take their rightful place.

It is like taking a ticket with a designated number that identifies what place you are in a queue. But with la vez there is no ticket, your number in the queue is invisible and in the trusting minds of others waiting to be served.

Is this better or worse than a strict one line queue?

It certainly helps those who are tired. If one needs to sit down, that’s ok, go over there and we’ll mind your space.

Or if you urgently need to do something in a different place. Don’t worry, go out and do what you need, come back and you’ll still have your place.

This flexible queuing system is nothing special. Similar kind-natured mentalities to queuing can easily be found all over the world. But it seems more part of the queuing culture here in Spain.

Does it always go well?

There are occasions when moans and groans fill a waiting room. Someone might mutter: “Were they actually here first before me?” After one sneaky customer jumps the queue ahead of the trusting public.

La vez also has a time and place. Some establishments are just suited for the one line conveyor belt system. Fast food restaurants being the prime example of in, out, get your food, eat and leave.

It really isn’t suited to our ever-growing fast paced consumer culture. “Hey, you left the line, get to the back!” Can be the expected and quite rude retort to those who left a queue momentarily.

And of course, not every single store in Spain can strictly adhere to la vez. How could a country function in such a way? There would be hundreds of stranded customers looking at their watches waiting for someone coming back from buying milk in a different shop.

La vez dates back to a time of small quaint shops. A time when customers in a shop already knew your name as you entered it.

Can it really work in this internet age? No matter what type of queuing system is present, people will easily get bored or frustrated having to wait for others.

From my year’s worth experience of living in Spain, I have witnessed la vez being upheld with good decency on a couple of occasions. One of which was when I queued for breakfast with my amigo in Madrid.

Perhaps la vez should not even be considered a traditional way of queueing in Spain, but just the common manners of people. If everybody is willing to remember who was last, then we won’t be so frustrated waiting in line.

Oh, I just remembered I was in a queue for an ATM five minutes ago, maybe I should rejoin it. Time to stop writing the article and hope someone saved my space.