WOMEN outnumber men at universities across Spain, according to official statistics.

In total, 55% of Spanish university students are female.

This gender inbalance in higher education has become typical of developed nations in Europe and around the world.

In the United Kingdom, for example, the ratio of men to women in university is similar to that of Spain.

Female students especially outnumber their male counterparts in the arts and humanities, as well as in the social sciences.

In the STEM (science, technology, engineering, maths) fields, on the other hand, the majority of university degrees are earned by men.

Despite women’s educational advantage, however, men within the European Union have lower unemployment and part-time employment rates than women. 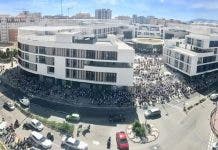 BREAKING: Schools to become child care centres from next Monday