I’M lying back on a wooden bench watching a profusion of kites bob up and down, almost in tune to the strains of Damian Marley on the sound system. 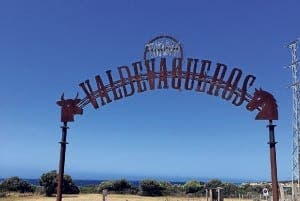 With a fabulous ‘superfood smoothie’ in my hand – the so called ‘magic maca’ served up at the new iZumo! juice bar – I’m about as chilled as could possibly be in Andalucia in July.

Also serving as the home of Mistral’s watersports centre and the launch pad of half of the world’s best kitesurfers, this is a place where you can literally spend hours watching the world go by.

“While it used to be just for sporty types, the majority of people come here now because it is super-hip,” explains Mistral boss Chris Ziaja.

It is certainly the spot to take up this fun, high-adrenaline sport, with current world leader Liam Whaley learning and basing himself here when not touring the world competing.

I gave it a go last year and while the 40-knot winds wreaked havoc with my classes – I’ll admit I let the kite go in a panic and almost lost it as it half blew to Morocco – I still had a fantastic time.

The restaurant is great, serving fresh food every day, while the new Burger bar serves up incredible patties.

There is some accommodation at the side and there is even a clothes shop Graffiti, the very epitome of cool, while its new neighbour iZumo! adds to the mix.

Opened by Daniela Di Placido this summer, she has been serving up juices around the world for nearly a decade.

A third brother James, a film director and producer from London, was also soon involved.

“I convinced my brothers that we would never make enough money from 12 rooms, so we obtained permission from the town hall to build an extra 23 and brought in an architect,” explains James, who is very much still the life and soul of the Hurricane – and its nearby sister hotel Punta Sur.

Over lunch at the Hurricane, he continues: “Once opened we converted the bricklayers into our staff, some becoming cooks, others waiters, others receptionists or gardeners.

“I explained to the builders that making a cake was as easy as making cement. All you had to do was throw the right ingredients into a mixer and stick it in the oven at the right temperature for the appropriate amount of time,” he continues.

“Called Hurricane Jeri it is the first stylish five star hotel there and we believe in winter a lot of the cool northern European crowd will choose to go there,” explains Peter.

Given his previous eye for business, it is probably very likely to be the case.

Be prepared: It makes life in Spain so much easier if you know what to do in a crisis