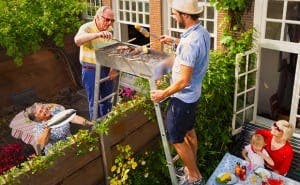 DISCORD between owners has been, is and will be a major source of litigation.

From chucking cigarette-ends over a fence to out-of-control barbecues, late-night drilling and banging or barking and/or smelly dogs, minor nuisances can escalate to a point where people will even move out of a neighbourhood, rather than deal with disputes in a less drastic manner.

Whatever the form of anti-social behaviours, if you are unlucky to have one such neighbour it is handy to know that the law is -generally- on your side.

The preamble of the 1960 Horizontal Property Act, later amended by the 1999 Act although frequently invoked by Courts, says:

The system of rights and obligations within horizontal property is structured by reference to the interests at stake. The rights of enjoyment grant owners maximum possibilities, only limited by the concurrence of equal rights of others as well as the general interest.

Article 7 of the most recent act says:

The owner and the occupant of a unit shall not carry out in such unit or in the rest of the building any activities not permitted in the community statutes, or which may cause damage to the property or contravene the general regulations concerning inconvenient, unhealthy, noxious, hazardous or unlawful activities.

The president of the community, on his/her own initiative or at the request of a unit owner or occupant shall urge the person or persons carrying out the activities banned under this subsection to desist under admonition of court action.

If your president happens to be too busy holidaying or spends most of his time in, say, Norway -where he is original from-, or if he is around but ignores your pleas, you can still act out of your own initiative by doing the following:

With a legal route clearly set out, it’s perhaps time to reflect for a minute and consider the empathy route, i.e. building a healthy relationship with those living next door by approaching the matter constructively, amicably, over a coffee or beer.