IF getting involved in a frenzied food fight sounds like fun to you, Spain seems be the top destination to head to.

Whether you think it’s wasteful or a good dose of community spirit, they are no doubt fantastic spectacles to experience. Here are five of Spain’s biggest and best food fights, clearly revealing that some parents never told their kids not to play with their food!

The Batalla del Vino, or Wine Throwing Fight, has been going on since the 13th century. Initially starting as a land dispute, it seems the only way for it to be resolved was by throwing copious amounts of wine at each other. Thousands take part every summer, and while armed with buckets, water pistols, crop sprayers and wineskins, battle commences and the residents of Haro turn into a population of Violet Beauregardes. Participants’ clothing is strictly all white, leaving the wine stained crowd an inebriated violet army.

Part of the Carnival at Vilanova i La Geltrú, where festival goers prepare to retrieve as many sweets as possible that are launched into the crowds, La Merengada showcases a free-for-all of flying meringues, targeted at anyone and everyone. Also known as the Batalla de Caramelos—the Candy Fight—the sweet celebration begins annually on Fat Thursday. To really have their fill before fasting starts for Lent, crowds enjoy a traditional Lenten meal, finishing with dessert in a rather less conventional manner. Hurling meringues and sweets all around the town, participants leave the ground is so sticky they are hardly able to leave even if they wanted to!

Head to the town of Pobla del Duc on the last Friday of August and you enter the main square at your peril. With the streets about to be flooded with grape juice, around 50-90 tonnes of Garnacha Tintorera grapes arrive, off-loaded from four trucks and ready to be thrown on a huge scale and turning everyone a strong purple hue. This annual festival began in a purple haze in the 1930s, hailing the end of the grape harvest, instigated by the hard working grape farmers needing to let off steam for a well-earned, good old fashioned food fight!

Els Enfarinats held in Ibi, Alicante is a truly egg-cellent festival, where participants combat with flour and eggs, creating a foggy mist of flour clouds throughout the streets. The festival has been taking place for two centuries, imitating a mock coup d’etat as the army, named Els Enfarinats, advance on the town every December 28th. They invade the streets, collecting taxes from the residents who are then shelled with eggs and flour. The aftermath resembles that of a volcanic eruption, and while the debris evolves into the beginnings of a pancake mix, the participants flee to attempt to breathe without flour intoxication. All is well in the end, though, as the ‘taxes’ collected are pooled to be given to a designated charity.

The biggest and best food fight of them all: all other food fights pale into insignificance where this one is concerned. Beginning in the mid-1940s, La Tomatina set the trend for all outdoor food fights, with 150,000 tomatoes, amongst 125 tonnes of tomato puree, thrown between 45,000 people to create the crimson river that surges through the streets of Buñol. The streets are redolent with colour and scent which lasts for days after, despite the fight itself only lasting around half an hour. La Tomatina is now a week-long festival, with the food fight taking place on the last Wednesday of every August. Don’t worry, after all the fun you can shower in public showers made available to stop you from marinating in your own tomato juices. Head on down if you fancy getting involved in painting the town red – literally.

• Helena Smith is a travel junkie, currently working as a marketing executive living in London. You will find her writing more features over at HypeMag. 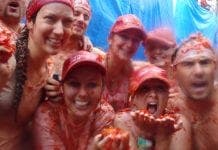 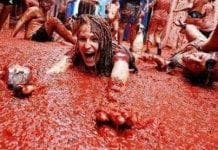 Tomatina ready to kick off: Let the chaos begin