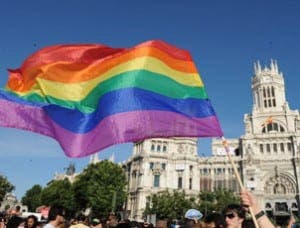 THE year was 1962. Spain was bowed in submission under the oppressive rule of General Franco.

Freedom was a rare commodity, homosexuality a crime that dared not speak its name.

Across the country, gay men and women were being thrown into prison and publicly lambasted for their sexuality.

But one corner of the Costa del Sol didn’t buy into the dictator’s harsh regime.

Sticking two fingers up to Fascism, Torremolinos offered Europeans the chance to live the free life they desired.

Drugs, sex, bikinis and rock ‘n’ roll – it was no holds barred as Torremolinos established itself as the new anything-goes capital of Europe.

Based in La Nogalera (loose translation, ‘walnut grove’, and the scene is certainly ‘nuts’ in a good way), Tony’s Bar set the LGBT district on its rainbow path.

The tourism revolution of the 1970s and ’80s flipped customs on their heads and boosted the resort’s reputation.

As Scandinavians, Brits, Germans and even Americans flocked to the Costa del Sol, its gay scene exploded into life.

And people weren’t only coming for a holiday… they wanted to stay.

Alongside the bars boom, demand for housing also went through the roof.

As Alberto Sanchez of Apartamentos la Nogalera explains, “The boom in tourism led to a demand in housing.”

His family erected some of the first apartments which are still standing today.

“With all the expats and Spanish people flocking to the coast, it became more necessary to build homes,” he says.

“It really took off and my family benefited from it.”

The ball set rolling in the Swinging Sixties gathered momentum during the ’70s and was out of control by the ’80s.

Today La Nogalera is a Mecca for the entire LGBT scene, although the scenery has changed.

Aqua is only the latest bar to open its doors, although it’s one of the most eccentric.

A bar, club and sauna all rolled into one, Aqua has already established itself as the go-to place in Torremolinos.

New watering holes may come and go but, more than half a century on, Tony’s Bar and La Nogalera are still going strong. They have both earned a place in history.

And, judging by the many tales told over foaming pints of ale in this nutty district, their story looks set to run and run.

To read our first ever Gay Pride supplement, click here.