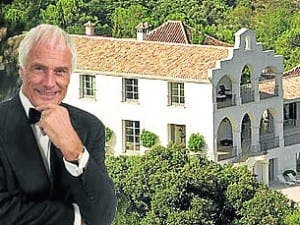 GIVEN he has been a eurosceptic throughout his whole political career, it is, perhaps, about time that Robert Kilroy Silk is finally selling his palatial Spanish villa.

The former UKIP MEP and media personality, 73, has put his enormous country estate, near Casares, on the market for an estimated €12 million.

The 368,000 m2 plot is being marketed through Villas and Fincas estate agent.

It certainly takes some beating as a rural retreat, with its mile-long drive, herds of goats and sheep and a jacuzzi and spa.

In fact, it is almost impossible to find or view it, all the while just ten minutes from the beaches of the Costa del Sol and 45 minutes to Gibraltar airport.

The beautiful converted olive mill is also not short on mod-cons, fitted out with a full integrated Bose sound system, nine televisions and underfloor heating.

The main black infinity pool comes with its own underfloor heating and wifi, on top of soaring views of eagles and kestrels nesting.

There are also two cottages on the estate, a kilometre away from the main villa, which serve perfectly as staff accommodation, as well as stables for 18 horses.

Kilroy Silk, who controversially appeared on Channel 4’s Big Brother while still receiving his MP’s salary, previously rented out the property during the summer months, as revealed by the Olive Press in 2011.

A lover of operas and gold watches, the outspoken politician charged a staggering €12,700 a week to rent the kingly villa.

But, bizarrely, that didn’t include all the extras, such as €350 for air conditioning, €30 for a baby’s cot, €25 for a children’s high chair and even €5 for a map of the surrounding area.