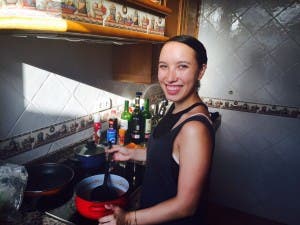 AS someone who can’t stand both soup and tomatoes, Spain’s summer speciality cold soups send a shiver down my spine.

So being asked to make gazpacho, salmorejo and ajo blanco all in one go was truly a face your fears moment.

I knew I was in trouble when I arrived at the supermarket and had no idea how to choose ripe tomatoes, but I forged on in the name of investigative journalism.

First, however, there were technological issues to deal with.

With no blender or a food processor, I was forced to use either my hand or an immersion blender, the latter worked surprisingly well coupled with a large jar. But if you own a glass jar blender, then you should definitely try making the soups in it. Not only because the glass jars are heat-resistant and durable but also they make healthier soups than typical plastic jars.

Each soup took less than twenty minutes to make, and thanks to many ingredient overlaps, required minimal work.

First up was the traditional Andalucian ajo blanco. Although sometimes referred to as ‘white gazpacho’, the lack of tomatoes made this one slightly more appealing.

After the almond blanching process, during which several rocketed across the kitchen from overenthusiastic skin removal, the soup came together quickly.

It had a velvety texture, and while the taste was startling at first, the combination of pungent garlic, sweet almond and rich olive oil produced an aftertaste to savour.

At which point I could put off the inevitable no longer; it was time to tackle the tomatoes.

After chopping them with one long sustained wince, I turned to salmorejo, a creamy soup from Cordoba.

Combining tomatoes with bread and egg produced an instantly suspicious pink colour, but the taste was a revelation.

Sweet and smooth with a kick of salt from the crumbled egg, the soup went perfectly with (yet more) bread.

Also from Andalucia, gazpacho is the most flexible of these soups, amenable to the creative addition of anything from avocado to watermelon.

I went traditional, however, using pepper and cucumber to add crunch to what I imagined would be a mushy tomato mess.

How wrong I was, the cucumbers and peppers were bright and summery, and the sherry vinegar added a necessary kick.

You’ll never believe it, but I even went back for seconds.

Half a baguette, crumbled

Half of a baguette, crumbled

Half of a red pepper

Half of a baguette, crumbled