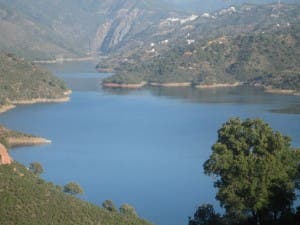 SUMMER up at the Casita means more visitors.

I don’t just mean my guests who, in the style of Hotel California, check out any time they like but never leave. The recent jellyfish invasion of the coast also meant that more people than normal have been coming up to swim in the lake, along with the usual Eastern European fishermen.

While I don’t have any problem with people enjoying nature (and the Casita is in a UNESCO-designated biosphere), I do have a problem with one thing. Litter. I don’t know what it is about people, but they seem incapable of taking their rubbish with them when they go.

Last Monday, for example, I ended up clearing away three supermarket plastic bags, one ripped-up crisp bag (destroyed by the bull terrier that one group of Spanish guys were letting run around without a lead), a scrunched-up sun hat and two Heineken bottles, both in one of my boats.

Now I may have been nicknamed the ‘Crankmeister’ by the Yummy Mummy, due to my ability to

go from 0 to irritable in milliseconds, but I think that I do have a point. Who the hell do they think is going to clean their stuff up after them? A posse of trained black bass?

Previous items that I have retrieved from around the lake include used nappies, plastic chairs, toilet paper and even boxer shorts and bikinis. Though how someone forgets that they were wearing a bikini when they arrived is beyond me. Must have been one hell of a party.

The litter isn’t just unsightly, it’s dangerous. I was lucky not to lose the Casita to a fire earlier in the year, and a discarded glass bottle can easily cause a fire in the dry shrub.

One time, though, I lost it completely when I found plastic bags at the water’s edge filled with glass, fishing hooks and other rubbish hazardous to the wildlife. I was blaspheming loudly while booting the bags back up to the Casita, unaware that two Guardia Civil were watching.

After that I gained a new name in the village. Not so much ‘Dances with Wolves’ as ‘Curses at Bin Bags!!!”