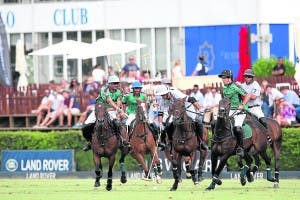 IT is perhaps the only place on earth where chinos are worn by grown men in every colour of the rainbow, from pistachio green to raspberry pink.

Until my day at Santa Maria Polo Club I was a polo virgin with expectations based loosely on Julia Roberts in Pretty Woman, where the real spectacle was the crowd rather than the players.

I wasn’t far off the mark. Peering up at the VIP box from the public gallery, I spotted hundred-euro dresses, thousand-euro watches and God-knows-what-price facelifts.

But Bulgari diamonds and Land Rovers aside, the polo is in fact the cheapest attraction here as, except for Finals days, the matches are FREE.

Down among the hoi polloi, Joe and Jose Public sport low-key polo shirts and espadrilles and there’s not a Prada bag or Rolex in sight. But admittedly, whether sipping fino at the Tio Pepe stand or getting invited into the VIP box of Spain’s polo president (and very nice it was too), elegance reigns.

The fast-action sport leaves golf – Sotogrande’s other major pull – languishing in the rough while the teams of perfectly-preened ponies and sizeable entourages of grooms and handlers echo a more glamorous bygone age.

It’s no wonder princes Charles, Andrew, William and Harry, Spanish royals, sultans and high society are attracted to this hallowed turf which pulls in a 50,000 strong crowd of spectators for the annual International Summer Tournament – this year’s is the 44th.

“Sotogrande is known as the ‘cathedral of European polo’ – it’s the best club in Europe and ranked third in the world,” explains PR manager Pilar de la Puente who escorts me through luxy VIP and backstage areas.

In a poignant, private moment I witness the US team wringing the sweat out of their tops between play as stable hands hose down horses with military precision.

“A team has just four players but around 25 people make up the full entourage and a massive 10 to 15 horses per player,” says Pilar. Whole teams book nearby fincas and villas for the duration of the tournament, she adds.

“It’s a different world, sure, with connotations of higher socio-economic classes but it is rapidly gaining popularity across the board,” she affirms.

But even the ‘kings of polo’ are unpretentious. I am spitting distance from world number one Adolfo Cambiaso, proudly sporting an Argentinian flag on his helmet, and I stop England captain James Beim as he strolls past with his young daughter.

“We spend about five weeks here in the summer and the kids love it – and the beach, too.”

The impressive kids club is just one of a huge range of attractions – shops, boutiques, eateries … there’s even a nail bar for the philistine few who choose to twiddle their fingers during the fast-paced action.

As the match progresses, the thrills build so that retail junkies desert the white-tented shopping village and cigar-chomping businessmen rise up from their cushioned VIP seats, the better to cheer on their favourite players through the final suspenseful moments.

The polo is what you make of it, as is the ‘after-polo’ (if you make the guest list), with champers and Grey Goose vodka flowing well into the madrugada,.

Jilly Cooper famously wrote that ‘polo is a drug only curable by poverty or death’ in her chick lit novel Polo, which she partially researched in Soto. It’s not her finest work but it certainly captures the glamour.

The loafer-and-chino uniform is optional but the unparallelled opportunities for people-watching should be compulsory so get down to Santa Maria Polo Club and enjoy the show!