ALMOST a decade after he put it on the market, David Beckham has shifted his suburban Madrid mansion.

The football star purchased the luxurious five-bedroom La Moraleja pad for €4.2 million in 2005 and recently sold it to a Spanish waste disposal entrepreneur for €5.8 million.

The recession came in the way of a speedy sale when Beckam moved from Real Madrid to LA Galaxy but they have proved that good things come to those who wait.

David, 40 and designer wife Victoria, 41, had purchased the house with heated swimming pool, tennis courts, football pitch and kids play area from a French couple and spent €475,000 renovating it. 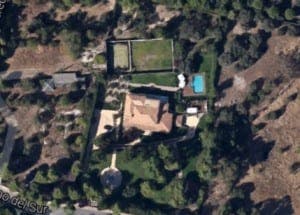 And the former Manchester United player also offered to let the palatial house to ex-Real Madrid star Kaka when he joined the club.

Beckham’s time in Spain was limited, he signed in 2003, rented three houses while they were there and stayed for just four football seasons.

It was during a stay at one of their rental properties that the salacious claims of Beckham’s infidelity with Rebecca Loos were published.