Chaves cited his teammate Mat Hayman as his inspiration, recounting that during the race, he told Chaves, “If you have good legs you have to race because you never know what will happen tomorrow.”

This quote proved unfortunately true for David de La Cruz from Eitxx-QuickStep and Matiej Mohoric of Cannondalte-Garmin, who dropped out at the start of the stage for a broken collarbone and heat exhaustion respectively.

Chaves regained the red jersey in the general classification, as Alejandro Valverde takes fifth and Chris Froome sits in seventh. 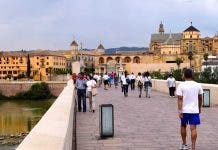 Lydia Spencer-Elliott - 30 Oct, 2020 @ 11:00
AT least 140 migrants have died after a boat travelling to the Canary Islands from Senegal caught fire, the International Organization for...