CHRIS Froome says he is unlikely to continue his Vuelta a Espana tilt after Wednesday’s punishing stage 11 over Andorra’s peaks. 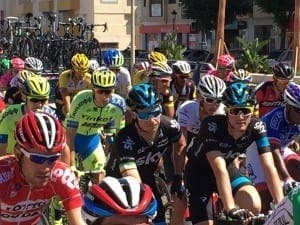 The British Team Sky rider crashed into a barrier five minutes into the 138km stage, which was won by Spain’s Mikel Landa, and ended 7min 30secs behind general classification (GC) leader Fabio Aru.

He had begun the day 1min 18secs off the lead before his hopes evaporated in the thin air of the Pyrenees.

“Further scans [on Thursday] morning but start unlikely as I can’t walk without crutches.”

Froome had suggested beforehand that the stage was the most testing he had faced as a Grand Tour rider.

The two-time Tour de France champion showed courage to dust himself his down and continue after his fall.

He looked ready to abandon with three of the stage’s six mountain climbs left, but was guided home by his fellow Sky riders.

“Thanks to the whole team for the support, especially @GeraintThomas86 for sticking it out with me today.”

Today’s 12th stage is a 173km race from Escaldes-Engordany to Lleida.