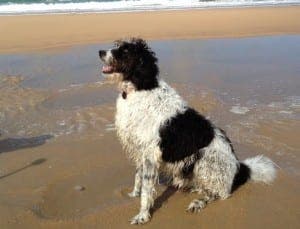 DOWN to the beach again!

But because it’s still summer we can only go early in the morning and late in the evening.

It’s good at that time of day, though, because apart from there being no policemen on quad bikes, there are also lots of other dogs for me to meet.

I’m a good dog and generally make friends easily IF I’m not on my lead, but put me on a lead and aggression abounds.

Admittedly, fun is to be had on the beach even when there aren’t that many people about.

For some reason waves don’t frighten me and if he-who-must-be-obeyed is out throwing himself about in the waves like a demented one, I’ll swim way over my depth to be with him.

But there are two other games I like to play.

One is to move to urinate on other people’s beach gear – maybe a towel, a windbreak or a fisherman’s gear… It’s so funny to watch him run after me to stop me doing it.

For maximum amusement, this should be done as far away from him as possible so that he has to shout as well, drawing attention from all and sundry.

The second good beach game is to make him use the black doggy bag as far away as possible from a bin.

I never answer nature’s calls anywhere near a receptacle so that he has to carry the bag as far as possible.

It’s important to train him properly to attend to my every need.

Shaggy dog tales from the ADANA shelter in Andalucia