ROLL out of bed, grab a coffee and your briefcase and… jump on a jet? 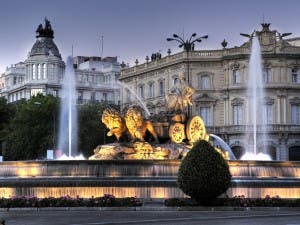 Commuting between the grey skies of London and the sun-drenched streets of Spain seems an impossible dream for umbrella-toting workers trapped in the ‘Big Smoke’ by their careers.

But what if you really could end the business week at Canary Wharf and be home in time for tapas and a nightcap at one of Spain’s quintessential chiringuitos?

It sounds like pie in the sky after one sangria too many but extortionate London rental prices have forced many city slickers to get creative.

And, as the Olive Press has discovered, there are far more expats doing it than you might imagine. With dozens – even hundreds – of intrepid souls checking in on Europe’s bleary-eye flights to trade dark and dreary evenings for stunning sunsets over Spain.

BBC presenter Nick Knowles is one of them. He joined the new breed of jetset commuters when he relocated to Spain earlier this year.

The Bristol IT consultants often used to rise at 5am, not returning home until after dark, passing each other like ships in the night.

But, after an epiphany, the couple, who have two children, upped sticks and moved to Arcos de la Frontera, near Cadiz, in June 2014… and it has revolutionised their lives.

While Sally has retrained as a teacher working in Arcos, Stephen flies from Malaga to Bristol on Monday morning, and returns home, via Gibraltar, on Thursday, a commute which works out at around €11,000 per year.

And, even better, Spain’s leaner living costs have left the Pikes with a fatter wallet, totalling thousands of euros a year.

“Our rent here is so much cheaper than in the UK,” explains Sal. “And we had to spend a massive amount on heating and electricity. It’s an awful lot less here because we
don’t have to pay for heat.

“My husband did some research into the cost of an average shopping basket in Europe and Spain is one of the cheapest.

“Most important of all, our Bristol property cost four times as much as our current rented home in Arcos de la Frontera.

“When we were in the UK we were basically living on credit cards. We had quite a lot of debt built up. We’re now in a position where we live well within our means, and with a much better
quality of life,” she adds.

“We’re now looking at the very real prospect of being debt free in 12 months time, which I honestly think would have taken five to eight years in the UK.”

The couple previously enjoyed a joint net income of €67,000. Although Sal’s salary dropped to €240 a month initially when she took a job as an English teacher in Spain, it has barely affected the family of four.

In fact, things are so good they are planning on opening a naturist holiday business.

“We can walk to the places where we socialise and our neighbours are so friendly and helpful,” adds Sal. “It’s so easy-going here, and there is a great community spirit.”

The Pikes are living proof of the way Brits are getting inventive to escape the eye-wateringly high costs of housing back home.

The issue was highlighted by London Mayoral candidate Tessa Jowell when she suggested it was cheaper for British workers to live in Madrid and commute to London.

While this is obviously theoretical, due to the travel time, the Labour MP was suggesting it to highlight the exorbitant €2,629-a-month rental being charged for a one-bedroom flat in London.

However, weekly it is possible, with personal trainer Andrew O’Donnell and his wife Henrietta, making the move from a Chelsea flat to Guadalmina three years ago.

But despite annual flight costs that can peak at around €25,000, Spain’s cheaper lifestyle more than compensates the O’Donnells.

“We pay a lot less now. It was about €680 a week for a two-bedroom flat in Chelsea, but it’s much more economical here,” explains Andrew, 49, who flies from Malaga to London every three-and-a-half days to keep an eye on the couple’s gym business, The Mission.

“We have a beautiful house with a swimming pool and 300 days of sunshine.”

Henrietta, 39, a qualified surfing instructor, keeps a close eye on the Marbella branch of The Mission when he is away.

And, as Andrew adds: “Business-wise, it is simpler than you might think. Most of what we do is in writing and we can talk to our staff by email,” he says.

For some commuting expats, it’s the outdoor climate, rather than the cheaper lifestyle, that entices them to these shores.

PR consultant Yasmin Sethna, who has a home in Sotogrande, remains based in London for work but came here about four years ago when her partner took a job in Gibraltar.

“We get the best of both worlds,” she explains. “ You spend a lot more time outdoors and I do like outdoor activities,” she said.

“There is plenty to do if you like sport with great golf courses, sailing, tennis and padel clubs as well as a good variety of restaurants.”

Yasmin can indulge her love of horse riding for only €30 a time in Sotogrande, a galloping discount on the hefty €130 it costs to do the same in Hyde Park.

“I think many people thought I was joking when I boldly declared it would be cheape for me to rent a two-bed flat in Barcelona and commute to London,” he wrote on his blog.

So this summer, Cookney upped sticks for Barcelona, racking up a five-and-a-half-hour commute to central London several times a month from his €800-per-month two-bedroom apartment in Spain.

In London, he had been paying almost €960 a month for a flat in a downmarket area.

Now, rising at 4.30am, he is in his London office by 9.30am and estimates that relocating to the Catalan city saves him several hundred euros a month.

Another long-distance commuter, Matt Ibbs, has travelled between Granada and Dublin every week for the past 20 years to his IT consultancy job.

He describes the area’s natural beauty as the primary draw for his family.

“We have a small farm in Granada, and we can ski in the winter, mountain bike in the spring and fall,” he said.

“We didn’t choose Spain for financial reasons, we could have gone to any European country but we chose to live in one we like and where we have ties.”

Keeping ties in two countries can yield rich rewards, providing you don’t mind flying. And just think of all those Air Miles!

Sad for my weekend husband

BUT dividing your time between two countries can come at a cost.

A ‘weekend husband’ can make a lonely wife, as Jessica Knowles attests.

The wife of DIY SOS! presenter Nick lives in Sotogrande with her one-year-old son Eddie while her famous hubby commutes back and forth.

The family relocated to Spain following a health crisis, when the BBC star underwent surgery for a ruptured artery in his sinus.

Jessica blogs about the wonders of living in Spain and watching her son grow but laments the ‘baby stages’ (talking, walking) that her husband misses when he travels.

When he returns, however, she sees the benefits of living in the beautiful Andalucian countryside, and being able to ‘settle into life in Spain a little more as a family’.

“Being out here means the time we will spend together as a family will be so much more special, and hopefully less pressured,” she said.

“There is such a sense of space here – I feel like I can finally breathe.” 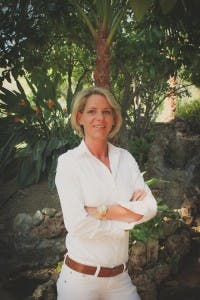 MARTINA Willis is the MD of a Swiss-based company and the owner of the Source of Wellness, near Coin.

For three years, she flew weekly between Zurich and Spain, leaving on Monday lunchtime and returning on Friday.

The two-and-a-half hour flights set her back €1,000 each month, but her quality of life in Spain was much better.

For the same price as the monthly €3,000 cost of her Zurich flat, she was able to
live in a much more luxurious place in Spain.

“You can spend every weekend at the pool and properly relax,” she says.

“My flat in Switzerland costs about the same as the big house we have here.”

I spent over a year commuting from Madrid to my investment bank in London.

That’s longer than a tube ride, granted. But after years spent suffering interminable delays on the Metropolitan Line, it felt like a lot less.

I travelled three or four times a month, usually leaving after work on a Friday and coming back on the first flight on Monday, after spending the weekend enjoying the Spanish capital.

With some judicious planning, my flight costs were kept  to a minimum. Sometimes I was lucky enough to get return flights for around €40. But that could rise to around €300, depending on the time of year and which airport I travelled from (City Airport was the most expensive).

I would leave London after work around 5.30pm and be painting Madrid red before midnight.

On Monday, I would be at my desk in London by 9.30am, bright eyed and bushy tailed (so long as I had a sensible Sunday night), and none the worse for the commute.