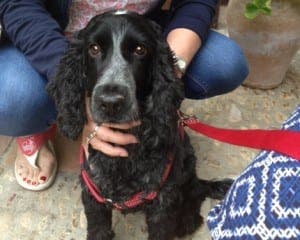 I AM over the moon.

After more humans than I can count, a dog has come to stay at the hotel.

And not just any dog. This is another abandoned dog like me.

Of course I had to put on a brave front when we first met – lots of barking and plant irrigation –  it’s useful that I carry my own watering-can!

I’m sure you want to know all about him. I can’t tell you his real name for data protection reasons but if I change it to Tim that should do it. Tom, oops I mean Tim, (almost gave it away there) is a black spaniel.

The good thing is that he’s only just found a loving home so he’s not as brave as me. (I’m not sure what a coward is but I’ve been described as that many times.)

Anyway Tom, I mean Tim, and I didn’t really engage in any deep, tail-wagging way but we did go for a walk together. It was the first time I’ve ever had a friend to show off to the other dogs in our area. I played it cool, showing him how to chase sticks. He doesn’t know about sticks yet.

He’s not into romance either – like me, he’s been ‘seen to’. However his mistress, whom I’ll call Jell to protect her identity, is lovely. She even left me some chewy treats when they left. Thanks Jill. Oops, I mean Jell.

My master says to tell you that the hotel is not a boarding kennels but well-behaved dogs are allowed in some of the outside rooms – and only ever one dog at a time.

If you don’t like dogs, please don’t worry that you’ll be bothered by them. He – the boss (sic) – guarantees that you won’t.

Back to my basket to dream of that special walk.