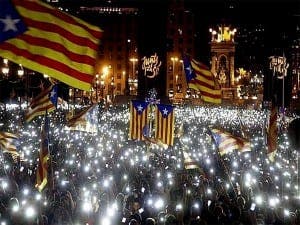 Artus Mas may claim victory for his pro-independence Junts pel Si, but failure to secure a majority of votes weakens him.

The left wing CUP’s ten representatives gives secessionist parties a majority of seats, but they remain fiercely critical of Mas and his centre-right politics, so any alliance could prove difficult.

Spanish leader Mariano Rajoy meanwhile, refuses to allow an independence referendum off the back of the result, but the facts are that five years ago around 25% of Catalans wanted to break away.

Now it’s nearly one in two.

Friction along Spain’s regional fault lines has echoed over the centuries. It will rumble on for a good while longer.

Perhaps Spain should do what the British dared to do in Scotland last year and give the Catalans a real chance to choose.

It would be a gamble, but at the end of the day it would be true democracy in action.