GIBRALTAR is undoubtedly made special by its melting pot of cultures, and the food is no different.

It appears the Rock’s celebrity chef Justin Bautista, now with his own show on GBC, may have some female competition.

Zoe Anna Torres, 38, who has just launched a new cookbook exploring the multicultural flavours of the Rock’s cuisine.

Maltese, Genoese, Spanish, Moroccan and British sections all feature in The Rock’s Kitchen, with the pages sprinkled with the author’s childhood recollections.

The book aims to promote Gibraltar through the best of its cuisine combined with anecdotal accounts of life.

“Each recipe is one piece of the puzzle that is Gibraltar’s people and our culinary influences,” Torres told the Gibraltar Chronicle. 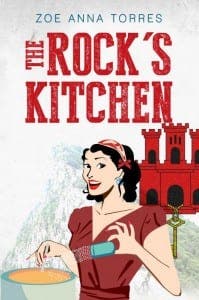 “I asked many friends and relatives how they made particular dishes. Each gave me their own ‘secret’ recipe passed down through the generations, written on scraps of paper blotted with grease passed down by their grandmas.”

The mother-of-two, whose culinary skills are entirely self-taught, came runner-up in the Rock Chef 2013 competition.

The Rock’s Kitchen can be purchased online from Amazon.