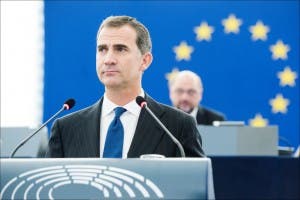 The Spanish King assured MEPs that the country was ‘united and diverse’ despite election results which cast doubt on Catalunya’s future within Spain.

Wednesday’s speech was part of the King’s official visit to Strasbourg.

King Felipe said: “Europe was built on the will to add, not to divide; of sharing and solidarity.

“You may count on Spain as a loyal member that is responsible when it comes to the European project; on a Spain that is united and proud of its diversity; on a Spain that shows solidarity and respect for the rule of law.”

Moments before his speech, two UKIP MEPs held up a Gibraltar flag. Read the story here.