FLASH storms are being blamed for an increased number of car accidents on the Costa del Sol. 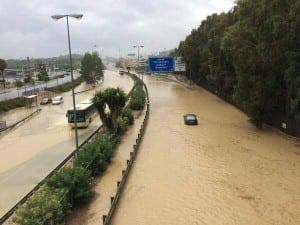 Two men lost their lives on Mijas roads over the bank holiday weekend during heavy rains.

A 60-year-old man died after falling from his motorbike and tumbling 10 metres down an embankment near to the racecourse.

Meanwhile, a 33-year-old driver also died in a head-on collision after driving the wrong way down the A7 coastal motorway.

Meanwhile a British expat couple were lucky to escape with cuts and bruises after their Smart car was hit head-on by an out-of-control driver in Estepona.

A police spokesman said extra officers are placed in ‘high risk areas’ across the country to slow drivers down in wet conditions.