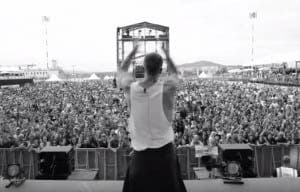 THE Rock became the backdrop for US rapper Beniton the Menace’s new video last month, and now it is the turn of pop rock group Lawson.

The English band told revellers at Gibraltar Music Festival they would be filming their new video after the show… and they stuck to their word.

Clips at the airport, up the Rock and of the band performing in Victoria Stadium all made the video for We are kings.

We are Kings is the second single from the album, Perspectives, out later this year.

See our story on Beniton the Menace’s video here.